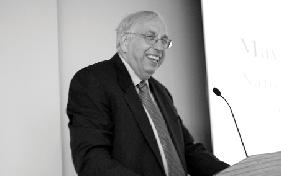 When University of Illinois professor of atmospheric sciences Donald Wuebbles is asked if a warm day in December is supposed to be proof of global warming, he laughs.

Wuebbles said many people are still finding it hard to accept that climate change is an issue.

“I get asked all the time if I believe in climate change, but the science is clear,” he said. “It is happening, and it is affecting you and me. Thousands of scientists around the world have put out major statements about this, not just me. It’s a very important issue.”

The only place where the occurrence of climate change is really being questioned is the media, he said.

“The debate [about climate change] occurs in the media, not in the scientific community,” Wuebbles said. “About 97 percent of scientific journals clearly indicate that this is a very big issue, and the only place it’s really being disputed is in the media.”

There is currently a lot of proof this is affecting the world, he said.

“We’re seeing a very major change in the climate and weather over the past 30-40 years,” Wuebbles said. “The temperature and sea levels are rising, glaciers are retreating, river flows are changing, snow is melting earlier. The people in Montana are worried that Glacier National Park will soon be known as the park formerly known as Glacier National Park. All the glaciers are melting.”

Wuebbles said there is a large misconception about the greenhouse effect.

“We’re putting more carbon dioxide and other gases in the air, which is driving a change in the global climate,” he said. “This is primarily human-induced. It’s sort of like wrapping a huge blanket around the earth.”

Wuebbles said the effects of global warming and climate change will be drastic and in our lifetimes.

“By the end of the century, there will be a 2.5-11 degrees Fahrenheit temperature change,” he said. “What does that mean? Well, double that is an ice age, so this is a pretty substantial change. In the Midwest, we’ll see increased summer and spring precipitation with drier summers. More of the precipitation will take place as a large event, like more frequent and intense periods of heavy rainfall.”

Making changes is necessary to slow the increase in climate change, Wuebbles said.

“The benefits of strong early action can greatly outweigh the costs,” he said. “We cannot completely stop the climate from changing, but we can adapt to it.”