Despite bus fiasco, Lupe and B.o.B concert a hit in Peoria 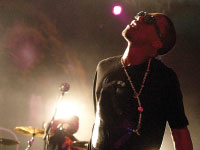 Lupe Fiasco and B.o.B. performed to an enthused and responsive crowd Tuesday night, although it took some students a little longer to get to the concert than they had planned.
The buses that were supposed to shuttle students from the Michel Student Center to the Civic Center Theater, beginning at 6:45 p.m., never showed up.
Director of Student Activities Michelle Whited said the Student Activities Office reserved six buses in January, but the bus company said it never received an order from Bradley.
Around 7:40 p.m., the SAO was notified of the problem and arranged for vans to transport students to and from the show, she said.
Although the show was set to begin at 8 p.m., opener B.o.B. didn’t take the stage until almost 8:45. The late start was not related to the buses not showing up. Students seemed to have forgotten initial problems once the show began.
“I thought the concert was a huge success,” said Special Events Reserve Fund Co-coordinator for the Activities Council Natalee Runyan. “From what I saw, it looked like everyone was having a good time, and that’s all we really wanted to see.”
Students purchased 1,530, or about 73 percent, of the tickets. Whited said this is the largest number of student tickets sold for a musical performance in more than 10 years.
“While we don’t have a long history of providing hip-hop music at Bradley, every time we do a show from this genre it is well-supported,” she said. “Based on the success of last night, it shows that Peoria needs more live hip-hop shows.”
Because 1,100 student tickets were sold the first day, students should have been the only ones in the front half of the theater, however it was clear some non-students found ways to snag top tickets.
But, overall, students dominated the crowd, whom both acts interacted with successfully.
Even though B.o.B.’s album doesn’t come out until next week, most seemed to know the majority of songs from both acts.
On top of the cheers, dancing and cell phones and lighters in air, B.o.B. and Lupe Fiasco both brought students up on stage. Lupe invited a student wearing a “Mrs. Fiasco” shirt to stay on stage for the majority of the show, and let her friends, “Lupe’s Dirty Mistress” and “Lupe Convert,” join later.
Although students seemed to enjoy the show, Runyan said surveys ACBU conducted in March said the top three music genres students want to see next year are rock, pop and alternative.
“This was the first time working with a hip-hop artist for most of ACBU,” she said. “It was a different experience than we’ve had working with rock and pop artists, and we all learned a lot from it. We definitely would not be opposed to bringing in another rap or hip-hop artist in the future.”
More from NewsMore posts in News »