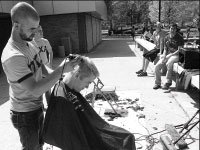 More than 100 students shaved their heads in the middle of Olin Quad Wednesday afternoon.
They did it to support Pi Kappa Alpha’s third annual St. Baldrick’s philanthropy.
“St. Baldricks benefits cancer research for children,” said Alex Oberlin, president of Pike. “A lot of times kids will lose their hair because of their illnesses and feel bad. We want to show that we do it by choice.”
He said around 125 students shaved their heads, and Nathan Thomas, executive director of residential living and leadership, shaved his legs. Oberlin said each student made a minimum donation of $5 to shave their head and gain access to food, drinks and snow cones provided by Pike.
“It’s nice to see kids come hang out in the quad and shave their head,” he said. “Last year we raised around $10,000 and this year we’re hoping for more.”
He said the event raised less money than last year but donations are still coming in.
“The total right now is around $3,350 but there are still donations that are coming in and have not been accounted for,” Oberlin said. “Even though this St. Baldrick’s day did not bring in as much money as last year, the event itself went very well and everyone involved had a lot of fun. We will take a look at what did not go so well and improve on it for next year to make it the best St. Baldrick’s Day yet.”
Oberlin said the philanthropy already underwent a few changes this year.
“We added a Subway and Baccis night [on Tuesday],” he said. “We wanted to make it more of a week-long event. We were going to have a stage with bands but that fell through, so we’re hoping to have it next year.”
He also said they are hoping to have more participation next year.
“Our secretary talked to local high schools to have people come by,” Oberlin said. “Next year we are looking to expand more to the student population instead of just greek houses, and we want to open it up to faculty.”
Oberlin said he is one of many Pikes who shaved their head for the philanthropy.
“This is my third year shaving my head,” he said. “I was part of the group that started this. One of our members got swept up in it, brought the idea to chapter and we decided to go all out. We got a lot of media attention from it and we got amped up.”
Oberlin said shaving his head was a statement.
“It’s like a bold act of solidarity,” he said. “I wasn’t embarrassed to do it but it can be a big deal for kids. My hair was long, almost six inches and I shaved it for shock, it was more noticeable.”
More from NewsMore posts in News »