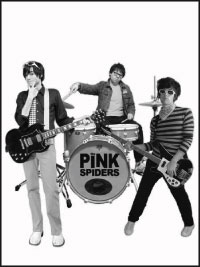 The southern music scene may be known for country acts and southern rock, but The Pink Spiders have been looking to change that ever since its 2004 EP “The Pink Spiders are Taking Over.” The group’s most recent release, “Sweat It Out,” is a fusion of modern power-pop sounds with ’50s- and ’60s-inspired riffs.
The result? A catchy, sassy, punk-filled and melodic album you didn’t even realize you’d been waiting for.
After achieving moderate success with its 2006 major label debut “Teenage Graffiti,” the Pink Spiders spent the next two years touring and preparing to record. Despite several delays, including the group’s van being broken into and burning to the ground, this March, the Spiders finished recording “Sweat It Out” and released its first single from the album, “Gimme Chemicals,” this August.
Unlike old Pink Spiders material, this album is less gritty-punk and more polished-pop, with a good amount of variation, especially in the vocals. Many of the tracks are inspired by classic pop and rock ‘n’ roll, with the members attributing this progression to some of their idols such as The Beatles, The Rolling Stones, Buddy Holly, The Clash and many other early rock ‘n’ roll and punk artists.
The album starts off with “Busy Signals,” a mesh of classic rock ‘n’ roll with bizarre lyrics referencing things such as grammar with, “Even I’m prepared to settle, but I’m not about to give my heart away to subjects without predicates.”
Instead of sappy lyrics about girls and broken hearts so typical of power-pop, the Spiders reference partying, birthdays, depression and especially growing up. This seems to be the underlying theme in many different lyrics in the album, most likely because of everything the members have gone through since their first full-length album, “Hot Pink.”
With so many influences colliding on one album, most of the songs are difficult to put in one genre.
“Gimme Chemicals,” “Truth or Dare,” “Settling for You,” “Maria” and “Here Comes Trouble” all have ’50s swing-inspired vocals combined with old-school punky guitar hooks. Other tracks have a bigger resemblance to older Pink Spiders material, with rougher guitar and less-polished vocals.
The third track, “Seventeen Candles,” concentrates more on the vocals than instruments and again deals with growing up. It’s definitely the kind of track that’s relatable to younger audiences, not to mention the punked-out “I don’t care what you think” fashions of the members themselves.
A few tracks aren’t as strong as the rest, such as “Don’t Wait for Me” and “Mrs. Ruston.” They sound like songs everyone’s heard before, bearing a close resemblance to songs by artists like Panic at the Disco, Plain White T’s and similar groups. Fortunately, these songs are overshadowed by the rest of the album.
Fans familiar with The Pink Spiders before this album may be disappointed with some recent changes, both in label and lineup.
Although the liner notes list Matt Friction on vocals and guitar, Jon Decious on bass and Bob Ferrari on drums, the live lineup no longer includes Decious or Ferrari. The album was recorded in late 2007 and early 2008 with the original members, but Decious and Ferrari left the band when it was finished for unspecified reasons, although there is speculation they left because of financial issues.
Producer Brendan O’Brien (Rage Against the Machine, Pearl Jam), plays keyboards on all the songs, but the live lineup now includes Friction and a new bassist, drummer and keys player.
The Spiders were under contract with Geffen Records when the group recorded “Sweat It Out,” but its members severed ties once they were finished and released the record on an indie label named Mean Buzz, in association with Adrenaline Music.
While the members may have had their differences, and the verdict is still out on how these changes will affect their live shows, this album is the band’s best release to date.
In the meantime, just sit back, relax and take a good listen to “Sweat It Out.” Putting label and member problems aside, the Spiders really have taken over and created their own genre. It was well worth all the sweat they put into it.
Grade: B
More from VoiceMore posts in Voice »