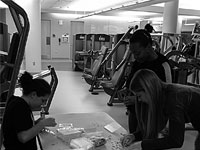 Another Late Night BU was hosted last Friday, borrowing its theme “Just Dance” from Dance Marathon, which also occurred as a part of the event.

Food for the event was provided by Alexander’s Steakhouse and included burgers, wings and chili. As always, there were also snow cones and popcorn.

There was an inflatable obstacle course again, which appeared to be just as popular as it has been for the last few Late Night BU’s.

However, there were several new additions to this month’s event.

To go along with the “Just Dance” theme, there were disco dance photos, a room where students could make their own music videos, Dance Dance Revolution and DJ Hero games were set up and there were belly-dancing lessons and Hypnotiq dance lessons.

Later in the night, there was also a dance competition.

In addition, students were also able to make a blanket for children who are patients at the Children’s Hospital of Illinois.

“I think it was really nice what they did for the Children’s Hospital,” Frye said.

Other events included a soccer tournament, a Nerf Commandos tournament, an inflatable jousting set, a food competition sponsored by the Dietetics Students Association, a room with secrets from PostSecret and butt caricatures.

“To be honest, this Late Night BU felt a little weaker than the other ones,” sophomore finance major Ben Sellnow said. “Maybe it was just that I came at an earlier time than I normally do, but I didn’t see lines that were as long as they were back when there were custom trucker hats, caricatures and flags. There were only butt caricatures, and when I walked by, there was literally no line for it.”

Sellnow also said the PostSecret room is getting a little old.

“I know they’re trying to draw attention for the PostSecret event that’s going to be held here, but it seems like they’re just recycling secrets for each Late Night BU,” he said. “You can just find newer secrets online.”

The final Late Night BU of the semester will be from 10 p.m. to 2 a.m. in the Markin Family Student Recreation Center.

Late Night BU events began last year, as a part of the university’s initiative to provide an alcohol-free activity to students every weekend.