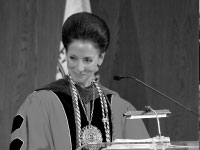 The life and success of our founder Lydia Moss Bradley was celebrated and honored at the 113th Founder’s Day on Thursday.
“I think that it is very important for students to attend Founder’s Day’s activities at least once during your Bradley career,” said Student Senate Graduate Student Advisor Jordan Ticaric. “It is enlightening to see the history and types of alumni that came through Bradley.
University President Joanne Glasser said this was a major event and “not just because a woman created it.”
“Imagine a woman creating a college in a man’s world,” Glasser said. “She had an intention to lead a legacy and lead others’ children and she’s accomplished that goal.”
Founder’s Day consisted of several events that honored the success of Bradley.
In addition to the traditional Founder’s Day Convocation and luncheon, this year there was a groundbreaking ceremony for the new $12 million, 34,700-square-foot Hayden-Clark Alumni Center. The projected opening of this facility has not been announced.
The convocation ceremony began with remarks from Student Body President Kyle Malinowski, and then was followed by words from President Joanne Glasser and Vice President of Advancement Pat Vickerman.
Malinowski talked about the struggles Lydia Moss Bradley faced.
“Instead of being stifled by times she endowed the community with a beacon of excellence,” he said. “Through her tenacity she left us hope … Bradley had foresight and taught us well.”
Following the opening speakers, several alumni were inducted into the Centurion Society, a society to honor outstanding Bradley alumni for their career achievements in business, professions and public life.
Following the convocation, the Bradley University Alumni Association and the Central Illinois Bradley Alumni Chapter hosted the Founder’s Day Luncheon to honor Lydia Moss Bradley along with the Centurion Society.
This year three Bradley alumni, James Weinstein ’72, Brad Cohen ’96 and M. Paul Moore ’62 were honored and recognized at the luncheon.
Classes for all students were let out or cancelled between 10 a.m. and noon in order to allow students to attend the convocation at Dingeldine Music Hall.
Much of Lydia’s life consisted of giving back to the community. After losing all her children during their childhood, and going through two marriages, Lydia focused on helping those in need.
She provided the Peoria Children’s Home with a house for its headquarters and allowed the children to occupy the building for a period of time rent-free.
Originally opened in 1897 as the Bradley Polytechnic Institute, the school consisted of a faculty staff of only 18 professors to teach a large range of academics which included languages, wood turning, biology and sewing.
Since Lydia opened the Bradley Polytechnic Institute more than 100 years ago, the campus has evolved into the Bradley University we have today.
Glasser said she thinks Lydia would be proud of the institution if she could see it.
“She’d be pleased with how far it reached out and what our graduates have achieved,” she said.
More from NewsMore posts in News »