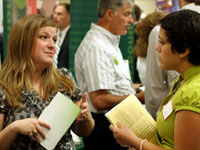 The negative effects of the economy were evident at Bradley’s Fall Job Fair on Thursday, but job-searching students and employee-searching companies remain optimistic.
“Many companies were hesitant to attend,” said Jane Linnenburger, executive director of the Smith Career Center. “They were unsure that they would be able to offer any positions to students.”
This year’s fair was significantly smaller than in years past. Last year, for example, 130 employers were able to attend the event, but this year only 80 companies were represented. The size of the event allowed it to be entirely in the Michel Student Center Ballroom, whereas most years, the fair overflows into the student center atrium.
The number of students also fell by 50 this year to 840, compared to last year’s 890.
“[The fair] was alright for the economy,” said senior psychology major Derek Williams. “But there was only insurance companies and engineering [companies looking to hire].”
Caterpillar Inc., a common attendee of Bradley job fairs, was there despite not being able to hire anyone.
Instead of collecting resumes Shaun Bollenbach, an employee of CAT for 12 years, handed out cards with Twitter and Facebook contact information. The company plans to notify students via those social networking sites when it has openings.
But other companies were actually looking.
Representatives from MSDS Online were there and looking to hire nine sales representatives. Last spring, the company set out to hire 15 to 20 sales representatives, but were unable to after the economy nosedived, said Natalie Lynch, an MSDS recruiter.
“We want [MSDS Online] to grow as fast as possible,” she said. “But now our goals are to just stay stable during this economic crisis.”
Senior construction major Matthew Koettlr said he isn’t worried about the economy. He also said he doesn’t have a problem with companies that only collected resumes.
Koettlr, who plans to graduate in May, remains optimistic about his job search and was hoping to walk away from the fair with an interview.
“They are here to find us just as much as we are here to find them,” he said.
Stephen Scully, of First Investors Corporation, said he believes the economy is turning around because of the way job fairs are beginning to pick up and that employers are now actually hiring.
“Working for a private company we haven’t had as many problems as others have had, and we are now currently hiring,” he said.
He advises students to have an open mind when job searching and to talk to many people as possible. Even though you may not be interested in the job they are offering, they may be able to help you find a position that better suits you, Scully said.
“In the last 10 years in my life I have forwarded at least two dozen resumes to help guide people in the right direction,” Scully said.
Persistence is going to be key in students’ job searches, Linnenburger said.
“The student who is focused on getting the job, who follows all the recommendations, who is creative in their approach should be able to find something that meets their needs, or something that helps them get established in a career,” she said. “Students shouldn’t be discouraged. The jobs are out there.”
For those who felt the fair didn’t meet their needs, it’s still early enough in the year for them to find internships and jobs.
But for students such as Williams, who is graduating in December, the job fair was somewhat of a letdown.
“I kind of put a lot of hope into the job fair this year, but there was nothing that was really interesting,” he said. “I guess I could have gotten a job, but not a career.”
More from NewsMore posts in News »