A piece of Bradley makes its way to Missouri 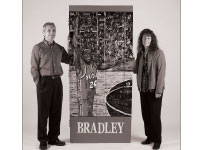 Kansas City, Mo., just got a door to the Hilltop. Literally.
Lori Luthy, creative director for Bradley, and Tom Gunter, a graphic designer in university relations, spent more than 100 hours over the last few months creating a pretty neat Bradley-themed collage on a door.
Yes, on a door.
It was by the request of Patrick and Joy Cuezze, who graduated from Bradley in 1996 and 1997 respectively.. The door is hanging on the wall of their door-themed restaurant, called Next Door Pizza and Pub, in Lee’s Summit, Mo.
“We wanted to take something that was kind of an iconic, unique moment in Bradley history, Luthy said.
That iconic moment? A picture of former point guard Daniel Ruffin shooting a basket, possibly at the game in which Bradley beat the University of Kansas in the 2006 NCAA tournament.
“I had actually seen a Mario Bros. collage, and I suggested we do that and use Bradley publications,” Luthy said. “That way we were able to incorporate history while showcasing an historic moment.”
So hundreds of copies of various publications like Hilltopics magazine and admissions material later, Luthy and Gunter had the beginnings of a collage.
“We just started tearing them apart and collecting color pallets,” Gunter said. “We found beige for the floor and, of course, we wanted Bradley red.”
Then they pieced it together bit by bit, working off a copy of the photograph.
“It was literally set up in the middle of Lori’s studio,” Gunter said.
Most of the work was done after business hours and on some weekends, but, in the end, the long hours were worth it.
“[The Cuezze] were very enthusiastic. They were happy to have it,” Gunter said. “I’m biased, but I do believe it was the best door out there.”
Standing a few feet away, the door looks as if someone screened a photograph to it. But get closer, and you can see all the individual pieces of Bradley that make up the collage.
A number of people important to the university’s progress were included by clipping their pictures out of Hilltopics and placing them in various places, like the audience behind Ruffin.
“It was tough because you can’t include everyone,” Gunter said. “We flipped through Hilltopics and if someone was featured there, they were significant.”
More from NewsMore posts in News »