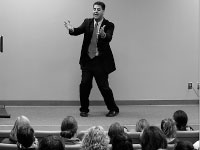 Brad Cohen will never forget fifth grade.
“I had a teacher who said ‘Brad, get up here in front of the class and tell them you’ll stop making those noises,’ “ he said. “So I went up there and told the class I’d stop making those noises … but what happened when I sat back down? I started making noises.”
Cohen graduated from Bradley in 1996 and has gone on to win awards for teaching. The other thing that sets him apart, though, is Tourette Syndrome, a neurological disorder he was diagnosed with at age 13.
The syndrome make those who have it twitch and make noises all the time, but especially when they are nervous or excited.
Cohen, who wrote a book about his journey to becoming a teacher and had a Hallmark Hall of Fame movie created about his life, was on campus Thursday to be awarded the distinguished alumni award.
He also spoke to students about his life.
“I have a story,” he said to a packed Marty Theatre. “A story I believe each and every one of you needs to hear.”
Cohen’s journey with Tourette Syndrome started at summer camp before fifth grade. It was in that grade that he’d discover the challenges ready to face him.
“I was the kid in the corner who made funny noises,” he said.
In his math class that year, he had a teacher who was really “out to get” him. Eventually, that teacher was able to kick him out of the class.
“So I went across the hall into another teacher’s room, and she said ‘go to the back of the class room and face the wall,’ “ he said. “And that’s what I did. That’s probably why I never was that good at math. I learned it backwards.”
But it wasn’t just the teachers making life difficult.
“The kid that sat behind me flicked the back of my head [when I made noises],” Cohen said. “There were kids that beat me up to try and get me to shut up.”
Eventually, the principal of his St. Louis middle school asked if Cohen would be willing to stand up in front of the entire school and educate them about Tourette Syndrome, and he did. He told the other kids that there was no cure, that he couldn’t help what he was doing.
“I told them that I was open about living with Tourette Syndrome,” he said. “I told them if they had any questions, they could ask me. And once I finished, I heard them [applauding]. They just wanted to know why it was that I was doing what I was doing.”
As he moved into high school, he became more comfortable with himself, improved his grades and joined several clubs.
Then once day he heard about a few colleges that were visiting his high school. Among them was Bradley University.
“ ‘I can see it now,’ “ he said to the audience, imitating his high school self. “Bradley Cohen attends Bradley University.”
He didn’t choose Bradley only because of its name, though.
“I knew I needed to go to a smaller university,” he said. “This is where I needed to be. This is it. And it worked.”
On campus, Cohen said he was warmly welcomed by the other students and his professors. He was also president of Alpha Epsilon Pi.
There was one well-known incident during his time on the Hilltop, though.
In his freshman year, he was at a restaurant in CampusTown. While waiting in line with few friends, he began twitching. Eventually, an employee approached him and told him he would have to leave.
That action prompted a campus-wide boycott of the restaurant and a number of Scout articles about it.
He said in his book, though, that he harbors no ill will.
After graduation, he moved to Atlanta, Ga., where he applied to many, many schools as an elementary teacher. It took a while, but he was finally about to find a school willing to give him a chance.
And in his first year, he won the award for Georgia’s best new teacher.
He later wrote his book, entitled “Front of the Class. How Tourette Syndrome made me the teacher I never had.”
“After the book came out, I got a phone call,” Cohen said. “I answered it, and the person said … ‘hi, this is Oprah Winfrey.”
In December of last year, the Hallmark movie bearing the same name as his book aired to 12 million viewers on CBS.
At the end of his speech on Thursday, he had some parting advice for the students.
“All it takes is for one person to make a difference in the life of a child,” he said.
More from NewsMore posts in News »