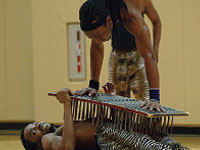 The group of five, originally from Kenya, performed an hour of stunts ranging from walking on nails to doing flips while jumping rope to doing handstands on a stack of chairs. Students were even pulled onstage from the crowd to participate or assist in several stunts.

The acrobats, known for combining Chinese and African acrobatic and dance traditions, won several national acrobatic competitions in Kenya, and was even named “Best New Act” at the Edinburgh festival in Scotland in 1990. Since then, they have performed all over Canada, the United States, Australia, Japan, New Zealand and Europe.

The student who helped bring the acrobats to campus found them by chance.

“The Jabali African Acrobats initially caught my attention when I saw them in a magazine I was flipping through,” Jason Pullan, previous performing arts coordinator for the Activities Council said. “After reading about them in the magazine, I researched the group and found videos of their performances on the Internet. ”