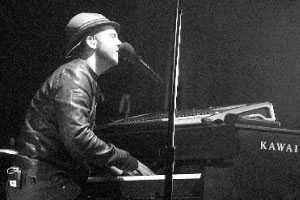 The Activities Council is tuning into students to see what band they want to bring to campus for its annual spring concert.
Special events reserve fund coordinator for ACBU Kathleen McGing said the group has begun its search, but doesn’t have any band in mind at the moment.
“We’re basing it on surveys from last year, and just generally what we hear people say they want,” she said. “We’ll ask around and talk to people to get the feedback.”
McGing said the demolition of Robertson Memorial Field House, where concerts used to be held, doesn’t decrease the chances of bringing bands to campus.
“It actually makes it easier,” she said. “We can have [a concert] on a weekday, because we don’t need student workers. Surprisingly, we didn’t hear a lot of complaints about it being on a weekday last time.”
The concert will be in the Civic Center Theater, where last semester’s OneRepublic concert was.
“The Civic Center allows a lot of flexibility, and the feedback about OneRepublic was pretty good,” McGing said. “Visually it was just a better show, and it sounded better, too.”
Junior finance major Kelly Donohue said she agreed.
“I really liked how for Jack’s Mannequin [in the fieldhouse] it was convenient,” she said. “But I think the Civic Center provided better seating and better viewing.”
The Civic Center has reserved continental seating, which means assigned seats stretch across the entire venue.
“I liked how it was first come, first serve to get in line for tickets,” Donohue said. “But in the fieldhouse you had to get there really early to get your seat.”
McGing said transportation from the university to the Civic Center will be available.
“I know a lot of people took the bus last time,” freshman actuarial science major Rachael Zimmerman said. “It wasn’t hard to find a ride.”
McGing said the concert will be after Spring Break, and ACBU is looking to book soon, because bands generally book two to three months in advance.
She said its budget is around $50,000, and tickets will likely be $5 for students.
Donohue said she’d like to see a band that a lot students are familiar with.
“I like a lot of different types of music,” she said. “I think what’s best would be a band that’s relatable to lots of different people.”
Junior elementary and special education major Casey Stark said she’s heard students say they’d like to see pop, hip-hop and country artists.
“The bands that we had the last two years were ones that I knew the songs, but I didn’t know their band names so I didn’t end up going,” she said. “I know a lot of big names, like Jason Mraz, we couldn’t afford. But something like that would be great.”
More from NewsMore posts in News »