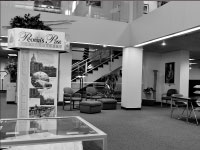 The university isn’t finished with improvements to the Cullom-Davis Library.
The focus of the next round of improvements is in technology.
“We’re providing technology so students can work in groups and have technology if they need it,” said Shelley Epstein, associate vice president of communication.
This phase of the plan will add large-screen monitors to eight study rooms and projection screens to two more.
The university is also purchasing 42 computer tables. Once the tables are installed, the computer lab will be spread across the first floor. So instead of having one corner of the first floor dedicated to the lab, all the computers will be split up.
The maple chairs, all 550 of them, will be refinished.
The plan also allows for the addition of 50 easy chairs with ottomans and the reupholstering of 550 chairs in the building. The carpet will be replaced during the summer as well.
The suggestions came mainly from the Library Student Advisory Committee report that was sent to administrators last fall.
“These changes will change the way [students] can use the library,” Epstein said. “The library’s core mission is to support the academic mission of the university. [The changes] go directly to helping students in that mission.”
Though the plan is finalized, no start or end date has been set, but Provost Robert Bolla said students should notice progress being made throughout the year.
“We have to get our bids in and let it happen,” he said. “There is no what comes first.”
The plan will be implemented in steps because, for example, the chairs can’t all be reupholstered at one time, or there would be no where to sit. Otherwise, as things are ordered and arrive, they’ll be put in.
Regardless, some of the changes will be made before the end of the semester. The remainder will be finished throughout next semester, and possibly into the summer.
“When you come [into the library] next fall, you’ll say ‘wow,’ it’s never looked like this before,” Bolla said.
The total cost of the project hasn’t been set either, mainly because the university hasn’t had any bids from companies as to how much the project will cost.
Epstein did say that the addition of the coffee bar and improvements to the entryway and HelpDesk cost about $100,000. The school plans to spend at least that much, but possibly more, during the next two years, which means a minimum of $300,000 will be spent by spring 2011.
“Making improvements to the library is a priority,” Epstein said. “There is work to be done. It is going to take a bit of time to develop a plan to use the resources available.”
More from NewsMore posts in News »