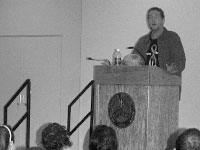 Patrick McGee said there is an epidemic in our world, an epidemic that is completely preventable – AIDS.
“We can wipe this disease off the face of the Earth,” the American Red Cross-certified AIDS counselor said.
That was his message to a group of about 40 students on Monday night in the Michel Student Center ballroom.
McGee spoke about not only preventing HIV and AIDS, but also about living with the virus and the syndrome and the difference between the two.
“Only one of my nine siblings speaks to me,” he said. “There was one Thanksgiving when everyone was eating off the fine china, but I had a paper plate and a plastic spork. And my sister who served the meal is a nurse. She knows there was no way to catch the virus by using the same plate.”
McGee was diagnosed with HIV in 1982 and with AIDS in 1995, but the diagnoses haven’t stopped him from living what he called a regular life.
“I have normal things in my life. I’m in a relationship with an HIV-negative partner, I’m a professor at a university,” he said. “Even though I have to take 40 some pills a day to stay alive, I do have a life.”
After he lost 11 friends in six months to the disease, he said he decided he needed to give back, and that is what prompted him to become an AIDS counselor.
McGee spent much of the night talking about the prevention of HIV and AIDS.
“We wouldn’t have to worry about this disease if we change our behavior,” he said. “It is completely transmitted through behaviors.”
The behaviors McGee was talking about include things the Center for Disease Control calls high-risk behaviors such as unprotected sex and any kind of drug use.
Along with a change in behavior, McGee said people must be educated about the disease, in particular, the difference between HIV and AIDS.
“You do not catch AIDS, you can contract HIV and that can lead to an AIDS diagnosis,” he said. “I can’t tell you how many times I’ve written to ‘Law and Order’ because they do something stupid with AIDS on a show. How can we expect people to be educated when the media isn’t?”
Although the HIV and AIDS “epidemic” isn’t broadcast in the news as much as it was in the past, McGee said it is still one of the most important issues in society.
“If we don’t fund [AIDS] education programs and AIDS prevention programs, your generation will be wiped out,” he said. “People under the age of 24 have the second highest infection rate.”
Junior journalism major Claire Johnson said she enjoyed the lecture.
“I thought it was very informative and I learned a lot,” she said. “I think his message is important … and it’s great that he came to Bradley.”
Junior business management and administration major Katie Sullivan said she also thinks the lecture was important.
“I thought the message was shocking, but in a good way,” she said. “It made the talk easy to listen to, it had a positive impact.”
HIV and AIDS tend to carry a stigma, specifically that only gay people get it, so it’s extremely important that everyone learn about the disease, McGee said.
“HIV doesn’t discriminate, it doesn’t care if you’re black or white, gay or straight, old or young, it’s a virus,” he said. “The bottom line is, nobody asks for this disease. I don’t care if you’re a drug user that shares needles or a prostitute. Nobody asks for this disease.”
More from NewsMore posts in News »