Alcohol plan not lowering underage drinking: Blood alcohol contents are down from last year, drinking tickets are up 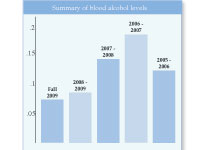 The Comprehensive Alcohol Action Plan hasn’t lowered underage drinking, nearly three semesters after its implementation, results show.
Last semester, 171 students were cited for drinking violations – just four short of the 175 ticketed during the entire 2008-09 school year.
“[A] goal of the alcohol policy is to reduce drinking, and it’s not working,” said Alan Galsky, vice president for student affairs. “But that’s directly related to the size of the party.”
Nathan Thomas, executive director for Residential Living and Leadership, said he too believes the rise in alcohol citations could be the result of large parties being broken up by Campus/TAP.
“Sometimes, the sheer number is because of large numbers of people at large parties getting busted,” he said. “One party this year had 85 tickets issued, which shoots up the number, but gives us more data and cases.”
The party Thomas mentioned was the largest party where alcohol citations were issued last semester. The remaining 86 tickets were issued at smaller gatherings or to individuals.
In addition to the higher number of citations, the number of students transported to the hospital spiked significantly last semester.
A total of 13 students were transported to area emergency rooms in the fall. Only four were transported during the entire 2008-09 school year.
“Before the plan, students had concerns with calling for help because they were afraid for their own well-being,” Galsky said. “Now police will give amnesty to the caller. We’re hopefully saving someone’s life … that’s beginning to work.”
Students aren’t exactly given amnesty, though. Under the alcohol plan’s good samaritan clause, the fine the university imposes on those who host underage drinkers or the underage drinkers themselves will be waived for the person who calls 911 for a sick peer. A city ticket will still be issued.
Not all the numbers in the report are up, though. The average blood alcohol levels of students who chose to be Breathalized dropped to .079 in the fall from .090, which was the average from last year.
“I’m pleased the alcohol content has been significantly reduced,” he said. “It’s an indication one of our main goals, reducing alcohol abuse and binge drinking, is being reached. It’s still early on, but the plan seems effective.”
Overall, despite the significantly higher numbers, Galsky said the plan is working.
“We’re going to exceed last year’s numbers [in MOVNs] for sure. I’m sure we’ll have more than four tickets issued this semester,” he said. “But I’m remaining cautiously optimistic. Our immediate concern is in reducing the alcohol content that is present in blood alcohol content levels.”
Galsky said he is happy with the average BAC level.
“According to the law, you’re a possible danger to yourself an others at .08,” he said. “We’re right below it, which is a significant guideline to look at. Last year we were right above it.”
He did say, however, that the BACs from this semester could tilt the lower average back up.
“Theoretically if there is a rise in BAC, it would cause concern,” he said. “The implementation committee and myself would meet and ensure a change in behavior.”
More from NewsMore posts in News »