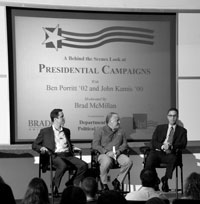 Two alumni working on opposing ends of the political spectrum came to speak last Friday to share their political experiences and roles in the upcoming election in a forum.
The Department of Political Science and the Institute for Principled Leadership in Public Service sponsored the forum, “A Behind the Scenes Look at Presidential Campaigns.”
Some students said the forum could be important in light of this election year.
“This election is going to set new precedents,” sophomore history major Rob Luigai said. “No matter who is elected, this country will have done something it never has before.”
The two alumni, Ben Porritt (Bradley ’02) and John Kamis (Bradley ’00), gave insiders’ views to working for the McCain-Palin and Obama-Biden campaigns to about 100 Bradley students, faculty and administration.
During the forum, the audience listened to what both men did to get their careers to where they are today and hear about their contributions to November’s crucial election.
After Porritt graduated from Bradley and was turned down by six law schools, he went to Washington, D.C., where he eventually secured a job in the White House’s West Wing.
He now works as media coordinator for vice presidential candidate Sarah Palin.
Kamis is assistant to Chicago Mayor Richard Daley, focusing on intergovernmental affairs. He also worked on Al Gore’s 2000 campaign. He often lobbies the legislature in Springfield, where he said Obama made strides in building bipartisan support. He now volunteers with Obama’s presidential campaign.
The two alumni – brothers in Sigma Chi during their time at Bradley –  also discussed the rapid media cycle and its effect on presidential campaigns. A quick rebuttal is necessary – if a candidate misses it, the chance is gone and it can’t be fixed, Kamis said.
“Bush flat-out lied, and Gore did not call him out on it,” he said. “If you don’t respond, you can’t recover.”
He also said unbiased news can usually be found in print journalism, but cable TV can be the worst at remaining unbiased.
Both men also suggested getting involved in the on-campus political clubs to see what work in politics actually entails and they stressed the importance of voting in the upcoming election.
Senior history major Lauren Hubbard said having a member of both the Republican and Democratic parties gave students a chance to hear about similar political work, but from opposite parties.
“It was nice knowing that Bradley wanted students to see what real world politics is like no matter which party you associate yourself with,” she said.
The floor was then opened up to audience questions for nearly an hour, where students and faculty were able to pick the minds of the two guests on everything from previous political experience to political views and opinions.
For some students, however, the upcoming election wasn’t the main reason for attending the forum.
Some students, such as senior political science major Sarah Brooks, talked about the valuable information for those wanting to go into politics.
“I just wanted to learn about potential career paths in the field of politics,” Brooks said.
Students can register to vote every Monday through Friday at Bradley Hall.
More from NewsMore posts in News »