An ‘outpouring’ of support 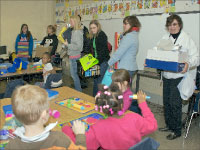 Devastated school receives $1,800 worth of donations from students and faculty

One classroom had feces smeared on its chalkboards. In another, cabinets were turned over and broken and books were destroyed. In another, children were left without a carpet to sit on.
On Oct. 26, Irving Elementary School in Peoria was devastated by vandalism, leaving children from already poverty-stricken families with even less.
However, last Friday, a small office of Westlake Hall was stuffed wall-to-wall with supplies and materials, donated by Bradley students and faculty, ready to be delivered to the school.
“Knowing the poverty of so many in Peoria, their school and their classroom is their home and their haven,” said Patricia Chrosniak, an education professor who first organized the effort. “Just to come in and see it ruined … is rough.”
Through Bradley’s effort, which included 17 organizations and classes, about $1,300 and $500 worth of supplies for the school were raised.
“I knew in my heart that Bradley students were very strong and very dedicated, but what we saw here, this outpouring, was just phenomenal,” Chrosniak said.
She said the effort began in response to the destruction of Bradley graduate student and Irving teacher Denyse Hagemann’s first-grade classroom.
Chrosniak said Hagemann’s classroom was “hit the worst.”
“There were a lot of bleary-eyed, teary-eyed folks,” Chrosniak said of the students and faculty who received the donations last Friday. “The children were first graders and they were just very happy.”
Senior elementary education major Marcus Belin was one of the eight students who went to Irving School to drop off the donations.
He said he was excited to see how the children would react to the donations.
“One teacher came to tears because she was so happy to see that people really took everything that happened and came to support what happened,” he said.
Belin said he felt he was helping the children succeed by donating a small amount.
“Spreading human waste around a classroom, it’s unbearable for the people who had no reason to be involved,” he said. “I’m sure the teachers were really distraught at what happened.”
Belin said the vandalism slowed the process of learning for the children
“It’s just unreal,” he said. “People need to think about who their actions affect.”
Senior early childhood education major Nicole Bruno donated supplies such as paint, paper, markers, crayons, books and glue to the school.
She said she was shocked when she found out the school was vandalized, especially Hagemann’s classroom.
Bruno said she was surprised “how someone would have so much anger toward her to do those things. Being a first-grade teacher, she couldn’t have done anything to make someone that mad.”
She said she was especially sensitive to the devastation because she wants to be a teacher herself.
“It takes a lot to rebuild a classroom and supplies are really expensive, and she definitely needed the help of a lot of people,” Bruno said.
There are no suspects of the vandalism.
More from NewsMore posts in News »