Animals to take over Markin during Late Night BU 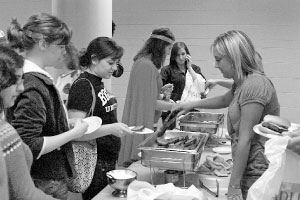 Mardi Gras is coming to Late Night BU.
Saturday from 10 p.m. to 2 a.m. in the Markin Family Student Recreation Center, students can experience their own, smaller version of the festival.
Allison Sutton, a student on the Late Night BU planning committee, described the events that will be offered to students on Saturday night.
“We have a lot of fun things planned,” Sutton said. “There will be a petting zoo featuring exotic animals, and we have also hired two people to do caricatures and airbrush tattoos.”
The petting zoo will feature various farm animals such as a miniature donkey, miniature horse, and a miniature cow as well as Ham the Potbelly Pig and Peter the Furry Chicken. Exotic animals will be present as well. Possible exotic animals are a kangaroo, emu, bearded dragon and a 35-pound tortoise.
“We are not sure exactly what other animals will be there, but some mentioned as possibilities are a fox, tarantula and snakes,” Lyndsey Withers, coordinator of Late Night BU, said.
There will be two people doing caricatures, and they will only take about one minute so as many students as possible can get their picture drawn.
In another section of the Markin Center, Skin Dimensions Day Spa will provide free makeovers for interested students.
Among other activities, there will be a card game room with different stations. Students who participate can win prizes.
“Students can play whatever card games they want, but there should be a poker table, euchre, uno, Egyptian ratscrew and an intense spoon game going on. Hopefully no one will get hurt,” Kathleen McGing, another student on the planning committee, said.
Body Project, an organization developed by the Women’s Studies Program in cooperation with Bradley University’s Center for Wellness, is bringing a belly dancer.
Students can have a blast as they learn belly dancing moves with their friends. According to the group’s Web site, this is an interesting and interactive turn for body awareness, an important matter for the Body Project, which promotes awareness and acceptance of the human body in all its shapes and sizes.
Freshman accounting major Alicia Nottke said she is planning to go this Saturday.
“I have been to every Late Night BU so far,” she said. “Last month was a lot of fun. There was ice-skating and we decorated Valentine cards. I also really liked the science show.”
Sophomore engineering major Kyle Mulligan said he also attended the last Late Night BU.
“The ice skating rink was really small,” he said. “It was different than I expected.”
McGing said she is looking forward to Late Night BU this weekend.
“This one will definitely be better,” she said.
Free food will be provided by Hooters, Papa John’s, Dunkin Donuts and Five Star Waters.
More from NewsMore posts in News »