Apartment complex off to a rough start 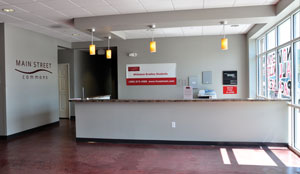 Only a month into the start of the Main Street Commons lease and some Bradley students are already expressing disappointment.

Last year the apartment complex was announced as a new housing option for Bradley students and many were excited about the promises of free tanning, a swimming pool, furnished apartments, private bathrooms and flat screen TVs.

Roommates Jori Lee and Shabre Jones, both juniors, said they noticed differences between what they were told and what they actually got.

“They didn’t have a lot of the things they promised,” Lee said. “We’re going to have to use our own money to buy a router for internet when it seemed like WIFI was going to be everywhere in the building.”

“We don’t have patio furniture,” Jones said. “There were supposed to be stores downstairs that aren’t there, the kitchen is a lot smaller than we thought it would be and there is no guest parking at all.”

For Jones, she said her biggest complaint is messy neighbors. She said she has found beer cans and trash filling the hallways on the weekends.

“There is a piece of pizza that’s been just sitting here for a few days,” she said. “I think some of the people who live here just aren’t being very mature about having apartments.”

Although Jones and Lee said the complex was not living up to their expectations, other Bradley students are pleased with the accommodations.

Junior Shalyn Caulley transferred to Bradley this fall and said the management at Main Street Commons has been really friendly.

“The management is so great and really helpful,” Caulley said. “Every time we’ve had a problem they have taken care of it quickly.