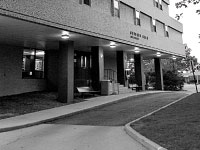 This school year, a new change has started effect for the Association of Residence Halls.
Four vice presidents will report to the ARH President instead of just one. Each vice president will be in charge of one committee instead of having separate committees reporting to the vice president and president.
“The change will allow for work to be more spread out and for more leadership opportunities to exist within ARH,” said current ARH President Sydney Steininger. “It is more of an internal restructuring, but the results will still be evident from the outside too. Overall, events will be more organized.”
The role of ARH is to plan educational and resident hall events, oversee hall councils and take concerns about food and housing. According to Bradley’s ARH Web site, ARH “represents the needs and interests of the residents as well as maintaining a stable and integrated Hall Council system.”
The idea for reorganizing began with last year’s ARH President Dan Short, who said he wanted to make ARH run more effectively.
This year will be considered a test year for ARH, which will be reevaluated at the end of the school year to see how effective the new changes will be.
“They may struggle a little bit in the beginning, but I think it will definitely help them in the long run,” Student Body  President Kyle Malinowski said.
Sophomore health science major Kelly Short said she thinks the restructuring is a good idea.
“It was definitely necessary. The restructuring ensures that everyone on the ARH executive board is accountable for the positions they hold,” she said. “As a student, it will be much easier to know who to talk to in order to report specific issues.”
Steininger said it will make life easier.
“Communication will be more direct, and hopefully the reorganization will be more beneficial for everyone,” she said.
Malinowski said he thinks it is a fantastic opportunity for ARH to better its presence on campus.
“The restructuring is just one example of the renaissance currently occurring at Bradley,” he said. “Many other student organizations are undergoing changes that will help both the constituents and the student body in general.”
More from NewsMore posts in News »