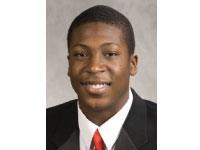 Taylor Brown, a sophomore forward on the men’s basketball team, was arrested and booked on a charge of battery last weekend.
Police were flagged down in front of Haussler Hall about 11:30 p.m. Saturday after a witness saw Brown, an AEP major from Atlanta, allegedly hit another man, who is an Illinois Central College student,  in the face, cutting his lip.
The victim told police he did not know Brown, but he knew a mutual friend told the player he’d been talking behind Brown’s back.
Brown also allegedly visited the   victim at work and made threatening gestures toward him at soccer game.
After his arrest, Brown was held at the Peoria County Jail.
Associate  Athletic Director for Communication Bobby Parker declined to comment, citing privacy concerns.
More from NewsMore posts in News »