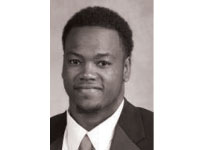 Eddren McCain quit the basketball team last week two days after being arrested and booked on charges of possessing marijuana.
Coach Jim Les said last Thursday that McCain is leaving the program and transferring to another school. It remains unclear whether or not his arrest was related to his quitting.
The sophomore guard was arrested at about 4:30 a.m. March 23 after police found him in the rear of a vehicle parked in the 1300 block of Barker Avenue.
Also arrested was Aimee D. Fisher, 26, who was with McCain in the rear of the vehicle.
Police approached the Ford Explorer because Fisher, who is banned from campus, was supposed to be driving it.
Officers shined a light in the vehicle and, seeing movement in the back, opened the door and asked McCain to exit.
After the two were out of the vehicle, police saw marijuana in plain view. After further searching the vehicle, officers found two rocks of crack cocaine, several hitter pipes and roller papers.
Those items were found inside Fisher’s belongings, and she was booked on charges of possession of marijuana, possessing of a controlled substance and possession of drug paraphernalia.
Both were transported to Peoria County Jail.
Fisher had been banned from campus for past arrests, including one two weeks prior to her latest in which she allegedly stole a lighter from a gas station and drove onto campus. She was booked on a charge of retail theft in that incident.
McCain told police they were sleeping in the back of the car because his coach didn’t want her in his apartment.
More from NewsMore posts in News »