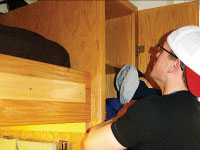 Geisert Hall has had a few new tenants move in this semester.
The residence hall has experienced incidents with bedbugs, among other issues.
Executive Director of Residential Living and Leadership Nathan Thomas said this is the first time the university has had problems with bedbugs.
“We’ve aggressively treated 12 to 14 rooms but have had only four or five confirmed cases,” he said. “Hopefully this helps, otherwise we will have to treat more rooms.”
Thomas said the treated rooms were not all on the same floor but the pattern has been consistent.
“These were isolated cases but were fairly well contained,” he said. “The potential for spreading is small. We are following the pattern.”
He said bug spraying occurred during Spring Break and even the days after students returned to campus.
“The spraying is not harmful to students at all,” Thomas said. “And they are only out of the rooms for an hour or two. The process is intrusive and every nook and cranny is sprayed. It can be intense and expensive.”
Thomas said generally residence hall mattresses are not replaced after each school year, but he didn’t think the bugs were left over from last semester.
“I think, if anything, the bugs were introduced after the start of this semester,” he said. “And mattresses that have any bug issues are pitched.”
However, it is unknown whether or not the bedbugs are from this semester or last. An adult bedbug’s lifespan is typically 12 to 18 months and they can live several months without a food source, according to the Ohio State University Extension. New mattresses can quickly become infested if bedbugs are still on the premises.
Master Gardener with the University of Illinois Co-op Extension Floyd McMahon said he doesn’t think spraying is very effective.
He said it can be difficult to find all hiding places and hidden eggs. Repellent formulas can sometimes cause bedbugs to scatter instead of getting rid of them, and very few insecticides are labeled for use on mattresses, according to the OSU Extension.
Bedbugs are a reddish brown color, oval, flat and about the size of an apple seed, according to mayoclinic.com. They can hide in cracks and crevices of beds, box springs, headboards and bed frames.
Thomas said he thinks the bedbugs were brought in from somewhere else and could have been brought by someone who didn’t live in the rooms that were sprayed.
The bugs tend to travel through clothes or items left on the floor and can easily travel between floors and rooms, according to mayoclinic.com.
Bedbugs don’t have a preference regarding the cleanliness of rooms but are attracted to crowded living spaces, making residence halls the perfect breeding ground.
Bedbug bites can be distinguished from normal bug bites. They tend to be red, with a darker red spot in the middle, itchy, arranged in a cluster or line and located on the face, neck, arms and hands, according to mayoclinic.com.
In addition to the bedbug infestation, Thomas said Geisert also had problems with what many students termed “cockroaches.” But Thomas said they were actually black beetles.
“We treated the common areas before break and then the floors and rooms during break,” he said. “They were not cockroaches, I think they were just a seasonal bug. They usually start to resurface in bug season.”
Geisert wasn’t the only hall with problems. Thomas said University Hall also faced mold problems.
“There were only a couple of rooms that had mold behind their cabinets,” he said. “It was a circulation issue.”
Freshman marketing major Tyler Hall said he noticed mold in his room after he came back from Spring Break.
“It was in the corner through the cupboards next to my bed and in the upper corner,” he said. “There was quite a bit, it spread behind my futon.”
Thomas said it wasn’t black mold, but regular green mold treated with water and bleach.
“There was nothing the students could have done,” he said. “I would just say to make sure wet clothes are actually dry before putting them away, it generates a damp atmosphere. But it’s not a bad type of mold.”
But Hall said the mold he had wasn’t just green.
“It was all black and some other colors in it, like purple,” he said. “The janitors told me it happens when there’s condensation and it’s cold outside. They said it was an air flow problem and the building wasn’t constructed right.”
Hall also said the janitors cleaned the mold with bleach. A health official was brought in to spray the mold, but told Hall he didn’t think it was necessary.
More from NewsMore posts in News »