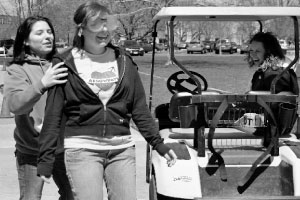 Drive isn’t effective at showing perils of intoxication behind the wheel, students say
Students had the opportunity to experience a drunk driving simulation this week.
Help Empower And Teach hosted its annual Bradley Educators Encouraging Responsibility Drive, better known as the BEER Drive, on Wednesday and Thursday.
The BEER Drive is an event where students can drive through the quad in golf carts while “under the influence” of vision-impaired goggles, commonly referred to as “drunk” goggles.
Two driving courses were outlined with caution tape and traffic cones. Students who participated in the BEER Drive also filled out pre-tests and post-tests about responsible alcohol usage and behavior.
All participants were also served complementary root beer.
“The reason that we do this program is to show the destructiveness of drunk driving from a ‘hands on’ approach,” HEAT President Ashley Porter said. “We have tried bringing in simulations before, but we have felt that letting students drive golf carts with goggles is a much more effective program.”
Students were also taught effective strategies on how they can decrease the risk of people they know driving after they have been drinking.
“Our mission is to educate, and I think that we do a good job with it,” Porter said. “You can’t force people to act one way or the other, but we are going to make sure that we provide them with as much information as possible.”
Freshman English major Ericka Carbris said she didn’t think the event would educate students as much as HEAT is hoping it will.
“I think it could be fun, but I don’t think it could really teach students anything,” she said. “People tend to be more stubborn when they’re drunk. If they want to drink and drive, they’re probably still going to drink and drive.”
Freshman studio art major Damon Taylor said he doesn’t think the activity is a very good way of teaching students that drinking and driving is wrong.
“By having this program, students are approached with the thought that drinking and driving is difficult, but without presenting them with any of the scary facts or consequences of drunk driving,” he said. “Our generation is presented to this information in this soft and cuddly way far too often and it only desensitizes us to the real consequences of life.”
Taylor, in addition, said he has a personal experience with a drunk driving accident.
“In high school I lost a friend to a drunk driver, and I feel as if this exercise is only mocking the suffering that people truly experience when a tragedy such as drunk driving strikes close to home,” he said. “The real consequences are the ones that I learned from losing my friend, not the fake, cuddly ones that these people are trying to present at this event, which really keeps someone from drinking and driving.”
More from NewsMore posts in News »