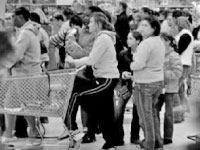 The faltering economy is affecting many aspects of students’ lives and with Christmas just around the corner, the economy is taking its toll on shopping habits, too.
“I did not think that more people would shop on Black Friday this year than did last year,” freshman criminal justice major Justin Reeg said. “I work at Circuit City, and although there were not as many people in the morning as there usually are, there were more throughout the day.”
According to the National Retail Federation, shopping later in the day is not the only new trend consumers took up this year. On Black Friday, the average shopper spent $360.15 this year, compare to $292.08 last year.
Junior accounting major Krissy Wolfe said she also thought people would spend more this year.
“Whenever the economy slows down like this, there are much better deals,” she said.
Although shoppers are spending more this holiday season, thus far there are fewer of them doing the spending.
The number of people shopping online and in stores in the four days after Thanksgiving dropped from 145 million last year to 140 million this year, a decrease of about 3.5 percent.
This means stores on Black Friday were not as busy as they usually are.
Some students still braved the cold and took the time to make the traditional early morning journey to shop on the biggest shopping day of the year.
“I got up at 2:30 a.m. on Black Friday,” Wolfe said. “I had to because I live 45 minutes away.”
In a Washington Post article, retail research company ShopperTrak said the total spent on Black Friday increased six percent from last year to $8.96 billion.
Some students still said they cannot afford to spend what they did last year on holiday gifts.
“I just do not have much money right now,” freshman mechanical engineering major Eric Gallien said. “I will definitely shop a lot less this year.”
Gallien said although he went shopping on Black Friday for deals, he regrets his decision.
“I spent way too much,” he said.
Despite the mixed results of Black Friday, it remains to be seen whether the rest of the holiday shopping season will be a bust.
“I think a lot of people just got their shopping done early and might not shop as much later in the season,” freshman mechanical engineering major Nick Popravak said.
The National Retail Federation estimates that holiday revenue will rise 2.2 percent this year from last year, which would be the smallest increase in the last six years, according to cnn.com.
Still, there are a few more weeks left before the holiday shopping season ends. According to a BIGresearch survey, less than nine percent of shoppers are done shopping for the season.
“Personally, I still have a lot more shopping to do,” Popravak said.
More from NewsMore posts in News »