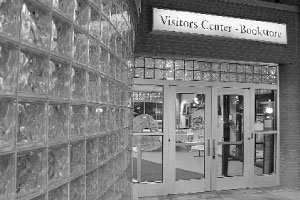 Student Senate has worked to expand hours to include select Saturdays, Ticaric said
The Bradley bookstore has added hours on Saturdays, but it will not be open every Saturday.
“The Student Senate wanted the bookstore to be open every Saturday, but for right now it is only increasing its hours on visit days and Parents’ Weekend so people can go in and check it out,” Student Body President Jordan Ticaric said. “Having it be open a little longer on Saturdays is a step in the right direction.”
Manager of the bookstore Paul Kroenke said that there are a lot of benefits that will occur if the bookstore is open longer.
“Both [University President Joanne] Glasser and the Student Senate wanted the bookstore to be open on Saturdays,” Kroenke said. “I think that it would be very beneficial on visit days, when students have friends and family visit, and even for some non-traditional students, the ones that work Monday through Friday and need a time to get over to the bookstore.”
Some students said the bookstore might get more use and they would take advantage of it being open a little longer.
“I think that the bookstore will get a lot more business,” freshman business major Rachel Grace said. “There have been a few times where I wanted to pick some things up from there on a Saturday and I forget that they are closed. It would help some students out a lot.”
Sophomore English and secondary education major Nikki Harris said she thinks the bookstore should be open every Saturday.
“It increases accessibility for students, and it is just more convenient,” she said. “Since the bookstore takes QuickCash, it is just easier to go there instead of heading off somewhere else that might be closed or doesn’t take it.
“Also, there are a few rare occurrences that would be beneficial, like when there are some basketball games on Saturdays and maybe some students need to run in and get a shirt,” Harris said.
Freshman family and consumer science education major Kendra Shambaugh said she thinks there are multiple reasons that the new bookstore hours will be beneficial.
“Sometimes it is too hard to get there during the week, and having it being open even one day over the weekend it is a lot easier for some students,” she said.
More from NewsMore posts in News »