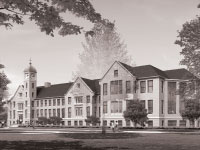 Once completed, the renovated Westlake Hall will be six times as large as it is today.
But that’s not the only change the 112-year-old building is looking at.
An additional four floors will be added along with a 100-seat auditorium and smart classroom with Internet2 capabilities.
The project takes up $22 million of the $150 million Campaign for a Bradley Renessaince.
However, a significant portion of that $22 million comes from a nearly $9 million grant the university was able to secure from the state of Illinois.
State Sen. Dave Koehler, D-Peoria, told the Journal Star he lobbied for the grant because the building will be used primarily to train future teachers.
Westlake hasn’t seen a renovation since 1961, when it was separated mainly into offices for the College of Education and Health Sciences.
The hall was build in 1897 by Henry Ives Cobb, who was the architect for the University of Chicago.
Westlake was originally named Horology Hall and was the only of its kind built solely for a horology school.
Horology is the art of making timepieces, and was a department when Bradley first opened its doors.
The Westlake groundbreaking comes only a few weeks after the groundbreaking of the Hayden-Clark Alumni Center
More from NewsMore posts in News »