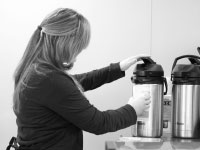 Once again, the Princeton Review rated Bradley as one of the top 371 colleges in the country.
The review ranks the top colleges and universities across the nation on everything from the quality of campus life and housing options to class size and campus facilities.
Vice President for Student Affairs Alan Galsky said Bradley’s high rating should help the school’s image.
“The Princeton Review is very exclusive,” he said. “When you figure it out, it comes down to about the top 10 percent of schools across the country.”
Although Galsky said he thinks prospective students will use resources such the Princeton Review to assist in their school search, he said he doesn’t believe Bradley’s ranking will be what convinces them to choose the Hilltop over other comparable schools.
“This is the best write-up we have ever had,” he said. “It’s really good that what they said about us is exactly what we say about ourselves.”
Student comments make up a large portion of the review, and most had only positive things to say about the university.
“[Bradley has] the resources of a large university with the familiarity that comes from a small liberal arts school,” one student said on the Web site, www.princetonreview.com.
The only downside of the review was that the Cullom-Davis Library was yet again ranked as one of the worst libraries in the country, but Executive Director of the Library Barbara Galik said she thinks the new addition of a cafe will help the library’s rating.
“It is great to finally have [the cafe] here,” she said. “It just seems like a logical place to put it. We wanted it visible so the students would know it’s here.”
Galsky said the Princeton Review’s high ranking of Bradley means a lot to the school.
“They have their own opinions about schools and get opinions from surveying students,” he said. “But they also come up with a lot of objective information. Ratings in college guidebooks are always a help in recruitment.”
Sophomore retail merchandising major Sam Anderson said she thinks the university’s high ranking will help Bradley’s image.
“It’s nice that Bradley is getting national recognition,” she said. “Hopefully this will attract more students and influence their decision to come here.”
Chad Miller, a junior manufacturing engineering major, said he agreed.
“Even though having a high ranking isn’t going to automatically mean more students will come here, it should help,” he said. “Doing things like adding a cafe in the library and building a lot of new facilities around campus will only help raise Bradley’s ranking over the next few years.”
More from NewsMore posts in News »