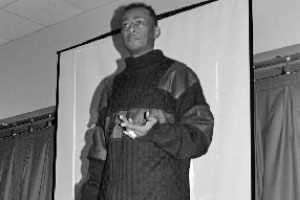 President Barack Obama recently visited Illinois to help celebrate Abraham Lincoln’s 200th birthday in Lincoln’s hometown of Springfield.
Students said they think President Obama’s achievements are a wonderful addition to the celebration of Black History Month.
“Even though the accomplishments of Barack Obama have changed this nation, my thoughts and feelings of the celebration of Black History Month have not,” Alpha Phi Alpha Fraternity Inc. President Marcus Belin said. “It is still strong and this is just another piece of history that can be added to the celebration.”
Students also said they were taught to show respect for this month.
“I made it my duty in high school to make Black History Month noticed,” freshman theatre performance major Danielle Davis said. “Especially because growing up I was historically-centered and taught to recognize my heritage.”
Other students noted Obama’s election as an important marker of change.
“Black History Month is more important now than ever, and I hope we keep seeing change made for the better,” freshman biology major Brian McKinley said.
Belin also said it’s been difficult getting students to take advantage of the multicultural activities on campus.
Multicultural Student Services offered some events to inform students.
“The Cooptation of the N-word speech and the Black History mobile museum are the two big things we are doing to recognize and value Black History Month,” Director of Multicultural Student Services Frances Jones said.
Also, the Geisert Dining Hall will host a soul food brunch this Sunday, and there is a discussion on African-American Issues at 1 p.m. on Saturday in the Garrett Center.
The development of this celebration began with Carter Woodson who is known as the Father of Black History Month, according to asalh.org. It was Woodson’s idea to dedicate an entire month to recognize African-American contributions to the United States and the world.
Woodson began his education at the age of 20 and went on to be the second black man to earn a Ph.D from Harvard University, after W.E.B DuBois. From there, Woodson realized the volumes of information on black history, and felt its contributions needed to be recognized.
He began with a week in February in 1926 and eventually in 1976 extended it to the entire month. February was chosen by Woodson, because it corresponds with the birthdays of Frederick Douglass and Abraham Lincoln, according to asalh.org.
There are also many other prominent moments in black history which took place during the month of February. Specifically, the birth of famous civil rights leader W.E.B DuBois in 1868, the passing of the Fifteenth Amendment, which granted black citizens the right to vote in 1870, and the National Association for the Advancement of Colored People was founded in 1909.
More from NewsMore posts in News »