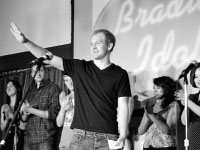 Bradley students were able to showed off their musical talent this week, but in the end there could only be one idol.
Sophomore AEP major Jochen Graf took home the $300 prize for his rendition of Tom Petty’s “Free Falling.”
“I just wanted to sing a song everybody would like,” he said. “My buddy was able to record the song for me. It just really worked out.”
Bradley Idol is hosted by the Association of Residence Halls and brings together all the best singers on campus to compete in a contest.
Bradley Idol’s panel of judges included Kerry Walters, an associate professor of music, University President Joanne Glasser and Director of Residential Living and Leadership Nathan Thomas.
Some of the judges said the performances were outstanding.
“I am pretty positive that nobody has ever rained on your parade,” Thomas said of senior advertising major Marlon Washington’s rendition of “Don’t Rain on My Parade.” “I like it. You’re very theatrical. It scares me.”
Some performers took songs to a different level with replaced lyrics.
Sophomore sports communication major Ian Yelton performed “You Belong with Me” by Taylor Swift by replacing feminine words and verses with masculine ones, singing at one point, “He wears V-necks. I wear T-shirts / He’s at the club and I’m here sleeping.”
After the performances, the judges deliberated on the top three performers while the male a capella group “On the Rocks” performed.
In addition to the top three winners, the audience was able to vote on the “crowd favorite.” This was the performer who got the most favorable votes from audience members.
Audience members voted for the “crowd favorite” by putting coins or cash into buckets with the contestants’ names. The contestant with the most money won the award.
The proceeds collected went toward “24 Hours of Music,” an event hosted once a year to help keep music programs in the Peoria school district open.
Freshman music performance major Jade Tunks was voted the “crowd favorite” and received $75.
Sophomore actuarial science major Rachael Zimmerman and junior biology major Swathy Sreekumar tied for third place and each received $75.
Washington received the second place award of $150.
Graf said he was surprised he won because of the strong competition, but he thinks his song’s appeal helped him secure the victory.
Before Bradley Idol took place, the hall councils of the residence halls were required to host their own “idols,” said sophomore English secondary education major and Bradley Idol program coordinator Katie Clemens. The top two winners from each residence hall advanced to Bradley Idol.
Some students in the audience said they enjoyed the event.
“I really liked it,” said freshman math and secondary education major Abi Vogel. “It definitely showed that there are a lot of people at Bradley who have talent.”
Other Bradley Idol performers included sophomore mechanical engineering major Jon Lindsay, freshman public relations major MacKenna Atteberry, junior mechanical engineering major Michelle Gerrity and sophomore international studies major Babette Jamieson.
More from NewsMore posts in News »