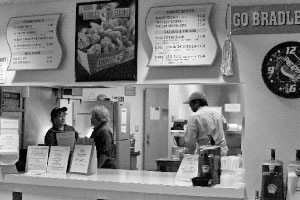 New sandwich restaurant in Student Center popular, ideas to replace chicken place are in the works
Sunset Strips, the chicken restaurant located in Cafe Bradley, won’t face the same fate as Blimpie did anytime soon, but Director of Food Services Ron Gibson said they might revisit the idea of replacing it next fall.
“There are a lot of things going on all around campus, from budget issues to new programs on campus that need more attention right now,” Gibson said.
There still might be a chance that a new place is going to come to campus, but Gibson said there is a lot to consider.
Gibson said he isn’t the only person who decides if it will change.
“I will get a student committee together, and they will decide what action to take,” he said. “I will occasionally add some information to think about, but they will ultimately decide what they think would be the best thing to do.”
Gibson said he has a major responsibility if the student committee decides to change it.
“The budget would be up to me if it was more on the minimal side, and it wouldn’t be a big deal if it gets changed,” he said.
Students expressed mixed feelings about whether Sunset Strips should be replaced.
“On weekends, there aren’t a lot of places open that accept meal plan, so I think that they need to have an idea for another restaurant to put in there before it shuts down,” freshman family and consumer science education major Kendra Shambaugh said.
Freshman business major Rachel Grace said she thought that change might not be a bad thing.
“Maybe it would be a good idea to put something in there other than just chicken,” Grace said. “The new sandwich restaurant that they put there instead of Blimpie worked, so maybe putting something new there would make it even more popular.”
Freshman biology major Christina Richards said she thinks the school could lose revenue if Sunset Strips closes.
“I was surprised to find out that the school was even thinking about closing it because I thought it was one of the more popular places to eat on campus, well besides the cafeteria,” she said.
Freshman business major, Kelly Cahill said she thinks if Sunset Strips is replaced, it needs to be with something better.
“I really like going there and I don’t think it would be the smartest idea to close it,” she said.  “If they do replace it, I hope it is something that is better, so it would have to be considered an upgrade.”
More from NewsMore posts in News »