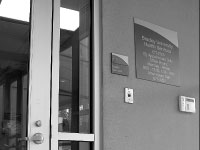 Bradley is among many universities across the country taking precautionary measures in order to avoid a campus pandemic.
Students and faculty received an e-mail last week from University President Joanne Glasser informing them of Bradley’s flu prevention plan, the three C’s.
Jessica Higgs, medical director of Health Services said the three C’s are basic.
“Cover your cough in your sleeve, clean your hands frequently and contain your illness,” she said.
The health center is collaborating with multiple departments in promoting Bradley’s “three C’s” flu prevention plan.
“Hand washing stations will be placed around campus in most of the lobbies,” Higgs said.
She said the most vulnerable for contracting the flu are “the very old and very young,” but the H1N1 virus, also known as swine flu, “prefers people ages 5 through 18.”
Others at increased risk include pregnant women, health care workers and those individuals who have chronic respiratory conditions or deficient immune systems, Higgs said.
For those who would like to take an extra precautionary step the Health Center will have a designated flu shot clinic on Sept. 22 when flu vaccines will be available. The vaccine will cost $25.
Flu shots are also available at any doctor’s office or local pharmacies, including Walgreens and CVS.
Higgs said the flu shot “is very good at covering other forms of the virus that are circulating this year [and] may provide some partial immunity against the H1N1 in shortening the duration of the illness.
“We have also requested the H1N1 vaccine, but don’t expect that to be available until early November,” she said.
With both the flu and the swine flu having similar symptoms, it is difficult to distinguish them from each other or even from an ordinary cold.
“At this point there isn’t much to distinguish the swine flu from the regular flu, so they are being treated the same,” Higgs said.
Common symptoms include a fever over 100.5 degrees, coughing, sneezing, sore throat, congestion, body aches and headaches. Nausea and vomiting are also symptoms, however they are not as prevalent.
Higgs said the first thing an individual should do if they think they have the flu is to stay home and call health services.
“If they have all of the symptoms minus the nausea and vomiting we will make them an appointment quickly,” she said.
The appointment will determine whether or not the individual has the flu and provide medication if the individual has it.
Recovery time for the flu is usually between seven and 10 days, with the first four days being the worst.
“The best way to recover is to rest and drink lots of fluids,” Higgs said.
Bradley is carefully monitoring the campus for a possible flu outbreak by keeping up-to-date on recommendations made by the Center for Disease and Control.
Higgs said she strongly encourages all students to take prevention measures seriously since they are an effective way of preventing disease.
More from NewsMore posts in News »