Bradley races for the cure 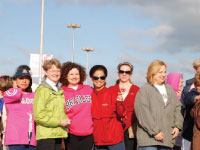 When University President Joanne Glasser was diagnosed with breast cancer last year, several campus groups joined forces to help.
Many participated in the Susan G. Komen Race for the Cure to raise funds for research and awareness, however Karen Metzinger hopes even more will participate this year.
“Last year was really just a building year,” the director of alumni publications, who helped organize Bradley’s team, said. “We have lots more to do this year.”
In order to participate in Race for the Cure, students donate $25 to the organization, receive a Race for the Cure shirt and participate in the race itself. If a student cannot participate in the race, they will still be able to donate money to the cause.
Once signed up to participate in the event, participants attend an event in May where they can pick up their Race for the Cure shirt while eating baked goods provided by a pink bake sale.
The event itself takes place at early on a Saturday morning, and Team Bradley traveled from campus to the Metro Center.
While about 200 people participated in the race last year, Metzinger said she hopes to gain the support of at least 500 students this year.
“We are going to start trying to get the word out to students earlier this year,” she said. “Last year we had less time to prepare for the event, but we’re going to begin letting students know about signing up this September rather than February.”
While most of the events to increase student participation leading up to the actual race are still being decided, some ideas include a rally in September and possibly a Sleep In for the Cure where students can donate $25 and will receive a pillowcase.
“Twenty-five dollars may seem like a lot of money, but when you donate that you are not only supporting the cause, but you are also supporting your school and President Glasser,”she said.
Glasser is now health and in remission.
Sophomore music education major Sarah Casey said she thinks Race for the Cure sounds like a good idea.
“It sounds like a fun time for a good cause,” she said. “I think it’s great that there are fun events like this to raise money for cancer research and awareness.”
Sophomore music education major Ashlie Schlatweiler said she agreed.
“I think cancer is a very important topic to research,” she said. “We need to explore as many possibilities for a cure as we can because cancer is so widespread these days.”
More from NewsMore posts in News »