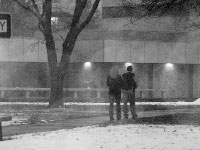 Grounds Crew prepared with snowplows, salt spreaders to deal with this year’s snowfall on campus

The first winter weather advisory for the Peoria area was issued this weekend, making some students’ journeys back to campus after Thanksgiving Break difficult.

“At points I could not even see two cars ahead of me,” senior entrepreneurship major Kim Braun said. “It was difficult to navigate when it seemed like you were driving into a white sheet.”
Peoria has accumulated five inches of snow this year, according to the National Weather Service, and National Weather Service Meteorologist Ed Shimon said central Illinois may see more snow this year than last.
“The weather prediction center is calling for above normal temperatures for the December-January time frame,” he said. “Whether that correlates to more snow and less ice, that’s a little difficult to pinpoint. In general, if you have slightly warmer temperatures it will lead to more mixed precipitation.”
BU Grounds Supervisor Stan Glazier said the university is prepared to treat snow and ice storms.
“We’ve got our own Grounds Crew that’s responsible for that. We’ve got eight full-time people and volunteers from other departments, which is probably around 10 more people,” he said. “The size of the snow depends on what time we get out there and if the volunteers assist.”
Bradley has three snowplows on trucks that remove snow on streets and in parking lots, three salt spreaders that apply salt and ice-melt after the snow has been plowed, three vehicles to remove snow from sidewalks and two big trucks that can remove snow from parking lots or from large areas if it piles up, Glazier said.
For large snowfalls, the crew and volunteers come in around 3 a.m., start removing snow on the corners of campus and work their ways to the center, as contractors remove snow from parking lots, he said.
“The key to snow removal is to get the snow removed before we have vehicular and foot traffic to pack it down and make it slick,” Glazier said.
Peoria City Spokeswoman Alma Brown said the city is also well-prepared for winter weather.
“This year we’re doing a salt-sand mix. It helps to spread out the amount of salt purchased throughout the year and make sure our supply will last longer,” she said. “[The crew] has been dealing with snowstorms for so long, they know the capacity of what they’ve used before, and we try to keep enough salt in stock to be prepared for the upcoming season.”
Brown said Peoria has close relations with the weather service in Springfield, and it often warns the city well in advance before a heavy storm.
“They try to get out there early if they know it’s going to be a certain type of precipitation, so it’s easier to get off,” she said. “On Saturday, we were well-prepared. We had trucks ready, we told everyone they would be on a 12-hour shift and we stayed ahead of the storm.”
Compared to last year, average temperatures are expected to be three to five degrees higher in December and January, Shimon said.
“You can’t really say it’s going to be 10 degrees warmer all winter,” he said. “It’s trends. It’s not really all the time. It’s going to be a few less cold outbreaks.”
Temperatures are expected to range from the mid-twenties to mid-thirties this weekend, and there is a chance of snow tonight, tomorrow, Monday and Tuesday according to weather.com.
More from NewsMore posts in News »