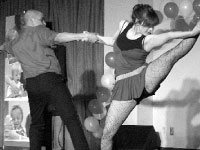 Tonight marks the third annual “Do You Want to Dance?” Easter Seals fundraiser hosted by BU Fellows.
Junior special education major and Fellows President Katlyn Mueller said she hopes for a large turnout.
“We do plenty of fundraisers throughout the year that go to support Easter Seals,” she said. “However, our goal for this event is that people will begin to recognize this dance event as a true annual event that people will look forward to every year.”
“Do You Want to Dance?” has raised money primarily for the Easter Seals foundation. While other fundraisers Fellows hold go into an Easter Seals budget for future projects, the money raised here goes straight to Easter Seals for its own use.
The idea for a dance inspired event took hold with the mass media craze of televised dance shows like “America’s Best Dance Crew” and Dancing with the Stars.”
“This event was something that Easter Seals came to us in hope of doing,” Mueller said. “After sitting down and having many discussions, we decided we wanted to make up this signature event for the group. That was three years ago and we are still doing it today.”
She said as of Wednesday, nine couples had signed up for the event, but they were hoping to get more by the Thursday deadline. Couples sign up for the event and create a two to three minute routine that will be performed in front of a panel of judges sent in by Easter Seals.
“Generally, Easter Seals sends over members from the community or board members that work for them to be our judges for the event,” Mueller said. “The judges are not really related to Bradley in any way, so that makes it easier for the panel.”
Any student, faculty or staff member can sign up for the event and compete for the grand prize of $250 and a trophy.
Mueller said with the siblings weekend going on at the same time, she is hopeful for a bigger than normal crowd.
“The dance event is just a fun event for everyone because it is such a mix of different clubs and organizations,” she said. “We might have a hip-hop routine followed by a swing routine. There is no saying what we are going to get, but it’s nice to know that with our siblings being there, it is a family friendly environment.”
Working very closely throughout the year with Easter Seals, Fellows hopes to fulfill the philanthropic endeavor it has sought since the group was established.
“It’s all about the students here, especially those in Fellows, reaching out to the community to use the resources we have to make sure the group we are working for gets what they want and need in order to successfully achieve their own goals,” Mueller said.
More from NewsMore posts in News »