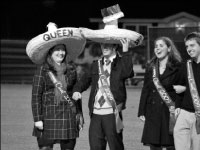 Homecoming 2009, dubbed “Fiesta de Bradley” stretched from Sept. 30 to Oct. 4 with many events including the Founder’s Day ceremony, Alpha Epsilon Pi’s Foamcoming, Late Night BU and a tailgate party and pep rally that took place before the soccer game against Drake University.
A few of the events were especially popular amongst students, such as Foamcoming.
“They passed out plastic baggies for people to carry their cell phones in so that they wouldn’t get wet,” sophomore history major Andrew Pasko said. “They also passed out T-shirts, and that was a good idea because who doesn’t like free T-shirts?”
For some extra safety measures at the event, someone manned the door as security to check identification and make sure only Bradley students were admitted. The event was alcohol-free, and that way there was less of a chance for people to get hurt in the foam.
“The only bad thing about Foamcoming was that it was kind of cold out, so after I was all wet from the foam, the cold from outside intensified the cold from the foam,” Pasko said. “Luckily, I was able to go to a friend’s house and change my clothes directly afterward.”
Another popular event during Homecoming was the tailgate party and pep rally that took place before the men’s soccer game at Shea Stadium.
“The Activities Council of Bradley University, or ACBU, brought some inflatables,” sophomore elementary education fine arts major Crystal Rains said. “There were a lot of different booths set up with different activities at each.”
Students were able to grab some of the all-you-can-eat nachos and tacos from the alumni who were serving food, as well as listen to the band Mike and Joe, which played for several hours. Afterward, the Bradley cheerleaders did their pregame pep rally.
“It was pretty fun despite all the rain,” Rains said. “People were still going down the slide even though it was soaking wet.”
Directly after the end of the tailgate party was the soccer game against Drake. Unfortunately, the Braves lost 1-3, but students said the game was still fun to watch.
“It was raining on and off throughout the entire game,” Rains said. “But it was a lot of fun. Drake was just scoring really crazy goals. Nobody scored after the first half of the game, though.”
During halftime, the Homecoming court winners were announced. Kathleen McGing was announced as queen, and Max Kerr was announced as king.
After the soccer game was the second Late Night BU of this year. There were several new activities at this event, and the mechanical bull, inflatable slide, custom trucker hats and airbrush tattoos seemed to be especially popular amongst students.
“All in all, I really enjoyed the two events I went to, Foamcoming and Late Night BU, as a sober alternative to normal weekend activities,” Pasko said.
More from NewsMore posts in News »