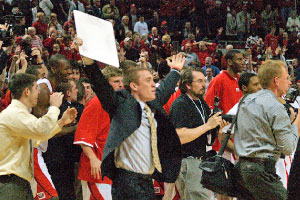 Bradley accepted a bid to the CollegeInsider.com Postseason Tournament earlier this month unsure of what the future would hold.
Now that the tournament is underway, things seem to be falling into place.
The Braves are on their way to the finals of the inaugural CIT, calming doubters of the tournament in the process.
“I think last year when we got into the CBI [College Basketball Invitational] there was a lot of unknowns and people unsure of ‘should we be in, should we be playing,’” coach Jim Les said. “And I think when it was all said and done we all looked back – players, coaches, administrators, fans – and said boy, that was a really good experience. I have a feeling we’ll do the same with this tournament, too.”
Unlike the CBI, which required a $60,000 guarantee, the CIT is in the $30,000 range, which was a better fit for the school based on the present economy, Director of Athletics Ken Kavanagh said.
The invitation to be a part of the first-ever CIT marked the sixth time in program history the basketball team has received an offer to be part of an inaugural tournament.
The Braves took part in the first ever NIT, National Campus Tournament, Commissioners Classic and CBI, and turned down an invitation to the initial NCAA Tournament in 1939 to play in the then more prestigious NIT.
While the CIT may not be on the same level of the NCAA Tournament or the NIT, it has allowed Bradley to reach the postseason for a fourth consecutive year, equaling the longest streak in program history.
“The CBI last year tried to go head to head against the NIT with a ‘Hey, choose us or the NIT’ mentality,” Kavanagh said. “The CIT, though, knows that everyone wants to go to the NCAA or the NIT, but if teams don’t make it, they want their tournament to be considered.”
The CIT has allowed the basketball team to make a postseason appearance for the 34th time and give the Braves a chance to add to the seven postseason wins they have compiled over the past three years.
Les said his players were excited to have the chance to dawn the jerseys a few more times.
“Our outlook now is ‘you know there is a championship to be won,’ and that is our goal,” he said. “We don’t want to diminish the fact that every year we want to try and play in the NCAA Tournament, but in lieu of the fact that that hasn’t happened this, for us, is the next best thing and we’re going to try to take advantage of that.”
The Braves have taken advantage so far, winning three games on their way to the finals, allowing the team to reach the 20-win mark for the fourth consecutive season.
The CIT hasn’t let fans down so far, supplying a game-winning, three-quarters court shot by junior Chris Roberts that will go down as one of the best shots in Bradley basketball history.
“So far, the tournament has been pretty good,” senior business management major Mike Pawlak said. “The teams have been more evenly matched than I thought they would be, so it’s been pretty exciting.”
More from NewsMore posts in News »