Braves basketball shoots for a spot in NCAA 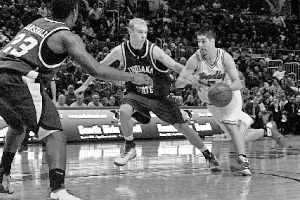 Bradley will kick off its postseason at 2:35 p.m. against Southern Illinois today at the Scottrade Center in St. Louis.
Students traveling to this weekend’s Missouri Valley Conference Tournament will receive free admission to Bradley’s games only.
Although the Braves are only guaranteed one game in the tournament, some students say they plan on traveling to St. Louis for the event.
“I’m really excited to go to the tournament and cheer on the boys again this year,” junior business management and administration major Ripki Patel said.
She said she thinks it is important for students to attend the game, even though the tournament is about two and a half hours away.
“The team really feeds off of the energy of the fans, which makes the game that much more enjoyable,” Patel said.
Junior civil engineering major Nick Barczewski said he has attended the tournament twice before and is eager to go again, because the fans’ emotions are always running high.
“I’m excited for the crowds, because it’s an interesting atmosphere having the other teams’ fans right next to you,” he said. “I’m also excited to see the team win the whole thing and make it to the NCAA tournament.”
Patel said she is optimistic about the outcome of this weekend’s games.
“The bracket worked out in our favor, because strong teams like Creighton and Illinois State are on the other end of the bracket,” she said. “Assuming we make it to Saturday, we’ve almost beaten [University of Northern Iowa] – the No. 1 seed – twice, so the chance that they will beat us for a third time is not likely. I don’t want to jinx it, but I have a good feeling about this year’s tourney.”
However, not all students are making the trip to watch the Braves try and win a spot in this year’s NCAA tournament.
Sophomore theatre and photography major Katie Morgan said she doesn’t think many students will attend the games.
“You would have to be a really huge basketball fan to go all the way down there,” she said. “It just doesn’t seem worth it to make the trip and maybe see them lose on the very first day.”
Senior social work major Connor Durkin said although it’s possible the Braves won’t make it very far, he agrees with Patel that Bradley has a good chance of winning this year’s tournament.
“At this point in the season, and with the way the MVC is, it is up for grabs who is going to win it all,” he said. “Bradley definitely has a shot and they are in a good spot to do some damage.”
Durkin also said he is counting on the Braves to make it into to the second round of play, but he encourages all students to try to make it to the tournament.
“I have a previous engagement on Friday, and I’m mad because of it,” he said. “But it’s good for students to go because it’s one of the most exciting Bradley basketball experiences you can have.”
More from NewsMore posts in News »