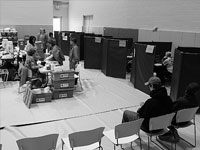 The rivalry between ISU and Bradley resulted in bloodshed this week.

Both schools competed in the Challenge on 74 Wednesday to see who could receive the most blood donations on campus.

“It’s cool that they are using are using our rivalry with ISU to support a great cause,” said secondary education major Mike Hoehn.

From noon to 6 p.m. the American Red Cross conducted the drive in the performance court of the Markin Family Student Recreation Center. Faculty members, staff and students participated in the drive.

“Reading the pamphlets while I waited [to give blood] made me glad that I am here,” said freshman education major and first time donor Teri Scimeca. “I didn’t realize how much people need blood.”

Bradley was involved in the Challenge on 74 last year, but had a small turnout. This year the newly developed BU Red Cross Club, BU Marketing Association and athletic department teamed up to sponsor the drive.

This year. however, the Braves beat the Redbirds with a higher percent of student participation. Bradley collected 113 units while ISU collected 144.

Sara Johnson, Donor Recruitment Representative for the American Red Cross, said the battle ended in victory for all because victims of the Haiti earthquake would be able to receive the donations.

Matt O’Brien, the adviser of the BU Marketing Association, said the original goal was 70 units, then changed to 87.

“Our goal changed a lot because we realized that we could get more people to donate than we originally thought,” said Cara Burghardt, a member of the BU Red Cross Club.

During the winter season, the American Red Cross frequently experiences a decline in donations and having a competition helps bring in a larger crowd, Burghardt said.

Public relations major and second time donor freshman Amanda Westpfahl said the competition was a main reason why she decided to donate.

“I am from Bloomington/Normal, and because of where I am from I feel that I have the need to support Bradley,” she said. “ I figured I should contribute.”

Even just two hours into the drive Monica Ray, a board member of the BU Red Cross Club, said the turnout was great, and they had received more walk-ins than expected. Ray said there was already talk of hosting the same drive next year.

“There was hardly a turnout last year, which makes this drive our largest drive yet,” she said. “Next year we are going to have to call in extra supplies and hire in bulk.”

“So far we have had more donors in one day than greek week had in two,” she said. “I’m excited to see how it all turns out.