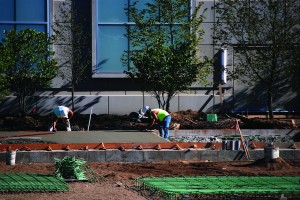 “The water company and a contractor were able to put a sleeve around the break so it won’t leak again,” Vice President for Business Affairs Gary Anna said. “To get to the break, they dug a hole and fixed it, but as water bubbled up, the asphalt deteriorated. Then the city came in, dug down several feet and scooped up the bad asphalt. That’s when they found old streetcar tracks surrounded by the original bricks that made up the street.”

According to an article in the Peoria Journal Star, the Central Horse and Cable Railway added a streetcar line from Main Street to an area near the intersection of Bradley Avenue and Institute Place in the late 1800s. The line served businesses such as the Peoria Knitting Co., the Peoria Metal Spinning Co. and the Peoria Watch Co., which were located on what would later become the center of Bradley University’s campus.

The last streetcar ran on Bradley Avenue in 1946 and the tracks were eventually buried beneath city streets.

“It was fascinating to get a quick look at history when those tracks came up,” Anna said. “After the water line was repaired, they just sealed them back up again.”

Not only did Bradley get some interesting bits of history when the tracks were unearthed, but the water line breakage was not as bad as it could have been, he said.

“If they’d had to shut off the water, we would have needed to issue a boil order, like last year when the water main broke on Main St.,” Anna said. “Luckily that wasn’t the case this time.”

He said the damage was taken care of relatively quickly.

“The break was at around 2 p.m. Sunday,” Anna said. “By 11 p.m., it was dug up and replaced. On Monday they dumped concrete in. Everyone worked really hard to put it back together. It was a huge inconvenience for travelers, who ended up using the circle drive in front of Swords Hall or the parking lot by the Heuser Art Center to turn around.”