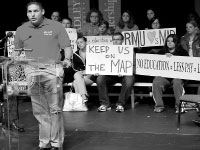 It looks like Bradley is no longer one of the country’s most apathetic campuses.
Next week, more than 250 students will be headed to Springfield for a student rally in support of funding MAP grants.
“This is an extremely important issue for all of higher education,” said Brad McMillan, executive director of the Institute for Principled Leadership in Public Service. “The MAP Grant has been in place for 40 years … enabling lower income and other students who need it to attend college. We don’t want Bradley to become a place where only the wealthy and elite can come to school.”
Those 250 students will be arriving in the capitol via five Peoria Charter Coach busses, all of which will depart at 10 a.m. Thursday in front of the Michel Student Center.
Students who receive the grants were encouraged by university administration to attend the rally, even if it meant skipping classes.
“We told the students that if they had a test or if they had a project, they should go to class,” said Alan Galsky, vice president for student affairs. “I think for some, if they don’t get the grant, there won’t be any classes. For many, their whole educational future is at stake.”
Galsky and Interim Provost Robert Bolla sent a letter to faculty this morning asking them to allow students who go to the rally to make up homework.
Upon arrival, Bradley students will converge on the state capitol building along with students from schools across the state.
“The intent is for it to be student led,” McMillan said. “The governor should be there, too.”
Following the rally, McMillan said he is planning to have several central Illinois legislators meet with Bradley students to help drive the point home.
More from NewsMore posts in News »