BU Police buy Ford Explorer for use in extreme weather 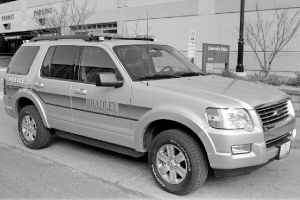 Less than a month ago, Bradley officials decided the university needed another police vehicle.
Instead of getting the classic Ford Crown Victoria police car recognizable to many students, a four-wheel drive Ford Explorer was purchased instead.
“The mission of this vehicle is different than other vehicles,” University Police Chief Dave Baer said.
The new four-wheel drive vehicle was funded by Bradley and was about the same price as the other police cars, Baer said.
Administrators decided the new vehicle would be good for the safety of students, faculty and guests because it’s more suitable for rescue and getting people to specific locations.
“As long as the campus police feel that there is a legitimate need for an extra vehicle in order for them to do their jobs protecting the students, then I don’t see any problems,” junior philosophy major Jared Kemling said.
The new squad vehicle has Bradley’s name across its side to identify it as part of University Police. It will be used during adverse weather conditions such as snow.
If other vehicles are broken or being used, the Explorer can be used to drive someone to the hospital if need be, Baer said.
“I don’t see it as being a need because we don’t have bad weather most of the time,” sophomore mechanical engineering major Gus Johnson said.
The Explorer will also serve as a backup vehicle in case the other squad cars experience mechanical problems, Baer said. Just a few days ago, two of the squad cars were down and one was having problems.
“All officers will get a chance to drive it so they can become acclimated to it,” Baer said. “It’s going to be a new experience for us as a part of our fleet.”
A taller and tighter vehicle, the Explorer is mounted differently than the Crown Victoria. The height of the Explorer allows for more road visibility. However, it won’t get as much gas mileage as its fellow squad cars.
The equipment that is in the trunks of the squad cars will be in the Explorer as well. The camera, laptop and control setup of the Explorer are being fitted into the vehicle so the setup is similar to the current cars. The new vehicle may also be more suitable for natural disasters such as fires or tornados, Baer said.
“In effect, it’s only a squad car with four-wheel drive,” he said.
Just like the other squad cars, officers will use it to issue moving violations and patrol the jurisdiction.
“Bradley doesn’t have a very big campus,” senior public relations and marketing major Chandra Avina said. “I don’t think we need a gigantic Ford Explorer to write people tickets.”
More from NewsMore posts in News »