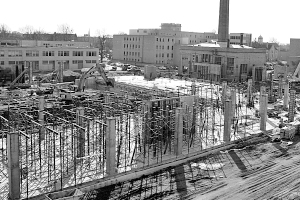 In March 2010, athletes will have a new building to call home, Planning Supervisor Kim Green said.
When construction on the Athletic Performance Arena is finished, most Bradley sports teams will play and practice there.
“The area will primarily be meant for men’s and women’s athletic teams,” she said. “The volleyball team will play there and the women’s basketball team, for example, will be able to practice and play there instead of having to go to Illinois Central College.”
Freshman psychology major Sam Howell said a stadium closer to campus will benefit the women’s basketball team.
“I think more people would be willing to come to their games once they are playing in the new arena,” she said.
The new facility will consist of two wood courts, a main arena, a weight room, locker rooms and administrative offices, Green said.
Green also said the seating capacity for the new arena will be significant.
“The partial basement stadium will seat 4,200 people,” she said. “This is a big improvement from the extra court in the Markin Center where the volleyball team has some of their matches.”
Green said the reason for the construction of a new facility is that the Markin Family Student Recreation Center cannot accommodate both students and athletes.
“The university felt that there was large enough student demand from the student population to use the Markin Center that it should be kept independent of the athletic program,” she said. “There is hardly a time when Markin is not alive with students.”
Some aspects of the new fieldhouse will attempt to replicate the Robertson Memorial Field House, Green said.
“It will have a curved roof intended to reflect fieldhouse architecture,” she said. “The fieldhouse was truly an icon for Peoria because it was host to so many notable events, and we hope the new arena can bring the community together like that.”
The size of the new facility will be 165,000 square feet, and the cost is expected to be $50 million, Green said.
“University President Joanne Glasser and Vice President for Business Affairs Gary Anna have stated that we are proceeding cautiously with this and other construction on campus,” she said. “Caution and efficiency are essential.”
Other construction projects include the Pre-law Center in Heitz Hall, which is scheduled to be done this spring and the Williams Hall project which will take place for the second consecutive summer this year, Green said.
“The Williams Hall project will consist of upgrades to the dorm area and addition of a sprinkler system,” she said. “There are also a number of other small projects going on throughout campus.”
The money for all of these projects is coming mainly from the Campaign for a Bradley Renaissance being run by Vice President for Advancement Pat Vickerman.
Green said she is confident the new arena will be a success.
“I am a big believer in the saying ‘if you build it they will come,’ ” she said.
More from NewsMore posts in News »