BU students may benefit from changes to Main Street 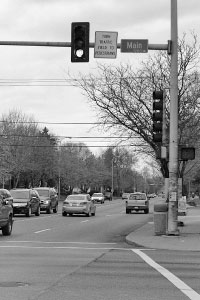 Campaign tries to make Main ‘walkable,’ students can participate in online survey to suggest improvements
Students could soon see some big changes to Main Street. Restaurants, lounges and wider sidewalks are some of the additions being considered by the city.
“We want to bring things that will attract people to campus and make Main Street more campus friendly,” Jordan Ticaric, a graduate student who is involved in the Campaign, said. “Campus has suggested more restaurants, lounges, clothing stores and things like that.”
The Campaign for a Walkable West Bluff is an organization committed to bringing these changes to Main Street. Lisa Ferolo is involved in the Campaign.
“The [Campaign] believes the community as a whole needs to come together to provide the City with direction and input on what we want,” Ferolo said. “There was no real community discussion recently because everything came to a halt with the freeze in the city budget.”
Ticaric said students could benefit greatly from the changes being considered.
“This is good way for the community to help Bradley and for Bradley to help the community,” she said. “The main goal of these changes is to make it so students can walk down the block and hang out. Bradley does not have much of a college feel right now.”
Ferolo said Main Street is not currently attractive to students.
“The current lack of a welcoming, thriving, safe Main Street is only a detriment to the current student body and clearly to any potential students,” she said.
Ferolo also said the condition of Main Street could affect potential students decision to come to Bradley.
“A prospective student’s opinion of Bradley and the city of Peoria should not be shaped by the vacant storefronts, speeding cars, few designated crosswalks and the general lack of ‘pedestrian-friendly’ design along Main Street,” she said. “We can and should do better.”
Ferolo said the proposal has benefits for the community as well.
“Students, as well as the neighborhoods, should have easy access to basic services, art and culture, restaurants, green/open spaces and select retail,” she said. “A healthy Main Street means healthy surrounding neighborhoods and a healthy West Bluff community.”
The proposal for changing Main Street has been criticized for not going far enough, Ferolo said.
“People were upset primarily because the intersection of Main and University was not slated for any changes,” she said.
The proposal was also opposed for causing too much traffic in the neighborhoods in the surrounding area.
“There were many who were concerned about an increase in traffic through the neighborhoods as a result of the recommendations,” Ferolo said. “The Campaign has always stressed that any changes to Main Street must be accompanied with traffic calming measures in the neighborhoods.”
Ticaric said progress could be slow in implementing the changes being considered.
“I don’t think everything will happen at once,” she said. “It was supposed to happen last year, but didn’t. You need a lot of support and approval for this kind of thing.”
More from NewsMore posts in News »