Build the block to better Downtown with museum 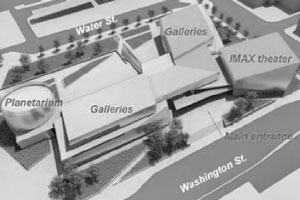 Voters in Peoria County narrowly approved a sales tax referendum that will go toward the Peoria Riverfront Museum.
The referendum won by 410 votes, receiving about 60 percent of the votes in the city and about 40 percent of votes in the county.
Brad McMillan, spokesman for the Build the Block initiative, said he was pleased, but not surprised by the election results.
“We anticipated that it was going to be very close, so we were thrilled,” he said. “It’s an extremely challenging time to be trying to pass a sales tax referendum with the rough economy … there were many obstacles in our way.”
The sales tax in Peoria County will increase by a quarter percent, or 25 cents for every $100 spent.
But even with that sales tax, the Block campaign still needs $10 million more.
“We have a $4 million request in with the Illinois Department of Transportation for the parking garage,” McMillan said. “And Jim Owens, the CEO of CAT, is going to host some private fundraisers at his house. So I think we’ll close that gap pretty quickly.”
He also said state Sen. Dave Koehler is trying to get $5 million from the state.
The museum will include an exhibition of Peoria’s past, an I-max theater, a planetarium and other revolving exhibits from the Smithsonian Institute in Washington, D.C.
Senior management and administration major Emily Thompson said students will benefit from the museum in a few aspects.
“I don’t know if [students] will use it, but I hope they will,” she said. “It will be such a cool addition to the community.”
But the museum won’t just give students something to do, Thompson said.
“I’m sure there will be more job and internship opportunities for students because there will be several museums,” she said.
In addition to the museum, Caterpillar Inc. is building a visitors’ center, called the Caterpillar Experience.
CAT officials had said that if the referendum didn’t pass, the company would cancel the project and the $50 million it had committed. McMillan said he expects this to be a main draw for students.
“The CAT experience is going to have all kinds of interactive exhibits,” he said. “And those who are engineer majors are going to absolutely love it.”
McMillan also said the I-max Theater will be a hit among students because Hollywood feature films will be shown in the evenings.
The museum will also come in handy for classes such as astronomy.
“We already have a number of students who use the planetarium at Lakeview [Museum of Arts and Sciences],” McMillan said. “But this is going to have 10 times as much.”
The Block is also predicted to be a moneymaker for the Peoria area not only because it is expected to attract tourists, but because it will create jobs to build and run the museum.
The ‘block’ refers to a city block Downtown that once housed a Sears store. In 1998, the city of Peoria purchased the property for $1 million. The Sears store moved later that year, and the building was demolished seven years later.
More from NewsMore posts in News »