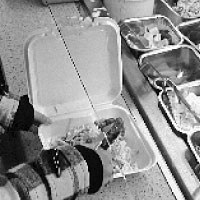 The cafeterias may soon be a little greener.
Styrofoam containers used to carry out food may be replaced by an environmentally friendly product made from sugar cane fiber. The product is 100-percent biodegradable and recyclable, Director of Campus Dining Ron Gibson said.
Food Services has been looking into buying eco-friendly products for several years, but cost has stopped them from doing so, he said.
“Three or four years ago all the [eco-friendly] containers were four times the cost of Styrofoam,” Gibson said. “Now the price has become a lot more doable.”
The price of eco-friendly paper supplies has gone down as the products have become more popular, he said.
Gibson said he estimates switching to the new product would cost about twice as much as Styrofoam.
“[Eco-friendly products are] on the front burner pretty much everywhere. Everyone’s talking about it,” he said. “I don’t think it’s always going to be twice as much. I think we may continue to see the price go down.”
Since eco-friendly materials do come with a higher cost, Business Manager Ken Goldin said he wants to make sure the switch will stick.
“The new materials are a 100-percent increase in cost,” he said. “Next semester, we will be starting the new materials in Geisert cafeteria. We will see what costs are before branching to other locations. We need to make sure this is what students want before it spreads.”
Styrofoam products are used for all meals served in Center Court and Cafe Bradley and when students get their food to-go in the cafeterias. Gibson said he estimates Styrofoam is used for about 25 to 30 percent of meals eaten on campus.
If Styrofoam is replaced it will be replaced everywhere, making every to-go dish and cup eco-friendly, he said.
Gibson said he’s not sure where the money for the eco-friendly products would come from, but Food Services is also considering another eco-friendly option that doesn’t cost money.
“We have talked about going trayless,” Gibson said. “A lot of campuses are going trayless to cut down on waste, because if you want more food you have to keep going back in line.”
Not using trays makes students less likely to take multiple plates of food at once, he said.
“We do measure food waste after each meal, and that’s honestly one of the biggest components of waste,” Gibson said. “We have thousands of pounds of waste a week.”
Sophomore special education major Ashleigh Pierce said she wouldn’t mind going trayless.
“It would be fine,” she said. “There would be a little inconvenience because you have your bowl, your plate, your cups and napkins. And it would be hard to hold all of that.”
Pierce said she thinks the eco-friendly aspect of going trayless outweighs the inconvenience.
Food Services already uses eco-friendly napkins and cleaning chemicals, but it can’t change its dishwashers that aren’t eco-friendly anytime soon, Gibson said.
More from NewsMore posts in News »