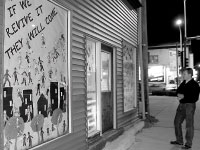 Imagine Main Street, but different – restaurants and shops intermixed with greenery and flowers, beckoning passersby to stroll, eat and window-shop.
That Main Street is what the Walkable West Bluff Campaign hopes to achieve, said Lisa Ferolo, a campaign volunteer.
Ferolo and the WWB committee are working to transform Main Street and the surrounding neighborhoods into a “destination point” – a business and pedestrian-friendly area with a vibrant culture and renewed sense of community.
“We feel Main Street could be so much more and have such a greater presence not only in the neighborhood, but in the whole city,” she said. “It wouldn’t only benefit residents of the area – it would also benefit students who are residents for nine months of the year.”
The committee launched the campaign nearly two years ago. Since then, it has blossomed, Ferolo said.
The WWB just formed the West Bluff Traffic Committee, whose goal is to work out a traffic plan for the entire West Bluff. The West Bluff boundaries are approximately Martin Luther King Avenue to Western Avenue to Columbia Terrace to the Main Street Hill.
“We want to make it safer to walk on Main Street and make it friendly to businesses,” Ferolo said. “The only way to do that is to slow the traffic down.”
The traffic committee is using recommendations from a traffic study conducted by the City of Peoria last fall to form a plan. It is also using recommendations from a 2009 Bradley student-conducted Renaissance Park Main Street Retail Study and individual neighborhood traffic plans.
“The traffic committee is being more proactive so we can go to the city and say ‘this is what we want,’” Ferolo said.
What the committee wants is slower speeds, on-street parking for easier access to Main Street businesses and clearly marked crosswalks and pedestrian signs, along with marking alternate routes to Downtown.
Besides the traffic committee’s work, the WWB planted a community garden on Western Avenue near Laura Avenue last spring. The Western Avenue Greenway Project donated a 20-by-38-foot vacant lot, and volunteers used donated fencing, composting and mulch to grow a variety of fruits, vegetables and herbs.
“We ended up with 500 pounds of tomatoes,” Ferolo said, along with watermelon, cantaloupe, peppers and herbs, which the committee donated to the West Mark Food Pantry.
The committee is also working on a window display project along Main Street, hanging murals in vacant storefronts to bring art to the area, she said. Kids from neighborhood schools helped with recent murals, and a mural from the Fine Art Fair sponsored by the Peoria Fine Art Guild hangs at Main and Sheridan Road.
“You pass by that building 100 times a day and you never see it,” Ferolo said. “Suddenly there’s a piece of art there and you’re like, ‘Oh my God.’ ”
Ferolo said the committee is communicating with Bradley students via their e-mails, obtained when the committee had a table at the Activities Fair, but hasn’t made contact with any students who were interested in helping with the campaign.
She said students would be a welcome addition to the campaign, especially those interested in assisting with the traffic plan, displaying their artwork on Main Street or marketing and public relations students.
More from NewsMore posts in News »