Campus Affairs committee aiming to green up the Hilltop 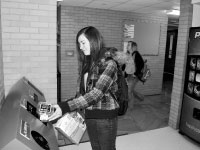 The process to make Bradley a greener community certainly hasn’t been an easy one. For several years changes have been made to the campus in order to become more friendly to the environment. This semester Student Senate is organizing a task force in order to encourage campus to become more green.

In the past couple of years Bradley has been making great efforts to become more green. These efforts are showcased on Bradley’s own Web site bgreen.bradley.edu.

The site list changes that have been made in the past like removal of trays last year in the cafeterias and the $4 million campus energy efficient lighting project in the quad area of campus that was completed this fall.

As well as green positive plans for the future with the construction of both Westlake Hall and the new Alumni Center. As listed on the site, both new developments will save energy by using water efficiency and CO2 emissions reduction.

“The Bradley Administration is doing a lot and has been working on many different initiatives to make campus greener,” said Student Senate Campus Affairs Chairman James Lombard. Although the Administration has been busy, Lombard said that there are still a lot of changes he would like see be made.

Lombard is currently heading a task force on Senate that will be dedicated to making more green changes on campus.

He will be working closely with several members of senate along with Sarah Redenius of the Student Environmental Action Coalition and students Nick Vera, Leah Moran and Melissa Wahl from the Student Green Electronics Campaign. Along with the committee of students Lombard has been keeping in close contact with Gary Anna, vice president of business affairs, meeting with him almost every week.

“Our goal is to come up with more solutions on how to make Bradley an even more environmentally friendly campus,” Lombard said. “I think students should see this task force as a sign that shows Bradley is open and committed to helping make a difference.”

The task force is brainstorming the most efficient and effective ideas to make Bradley more environmentally friendly said Lombard. They have not made any concrete plans for this semester.

Student Body President Kyle Malinowski said he would like to see some improvements made to the recycling system on campus.

“I would like to see a greener and more united look at recycling so that students can learn and adapt to recycling habits,” he said. “We just need the resources there to make it happen.”

Malinowski said he would suggest there be more promotion of recycling and more bins across campus.

Lombard said there has already been a big push for recycling and the administration has been doing a great job by allowing students to recycle at no cost. He said St. James Residences will be receiving notices announcing the opportunity to get a recycling bin for their apartment.

“Without student participation, it will be hard for Bradley to become a more environmentally friendly campus,” Lombard said. “Students should take advantage of the recycling services that Bradley provides on campus, in the dorms and in St. James Apartments.”