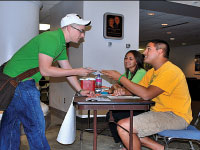 For the first time in several years, Student Senate has filled all its residence hall seats in its first open election.
The voting took place Monday and Tuesday and saw more than 10 times the number of voters than last year’s voting. After all the votes were counted, voters had elected 12 new members to Senate.
“We had about 474 total votes cast,” said Student Body President Kyle Malinowski. “We are very excited about the number of votes we had this year.”
Malinowski said of the 18 seats Senate has for elected members, 15 will be filled at Monday’s first meeting.
“The only seats we still have open are one off-campus seat, one St. James seat and one seat for the Student Apartment Complex,” he   said.
Those seats no longer need to be filled by a student who resides there, and anyone wishing to fill one of those seats can download a petition from Senate’s Web site, bradley.edu/campusorg/senate. Each petition needs to have 40 signatures from students living in the residence the student wishes to represent.
Although it is preferred that a student filling a vacant Senate seat lives in that residence, Malinowski said it is not required.
Malinowski also said Senate was pleased with how the elections turned out, and said it has high hopes for the coming year.
“It is very exciting that we filled as many seats as we did,” he said. “All of the races were won by a large number of votes – even the write-in [candidates] won by a significant number.”
“With the response we got at this election, we really don’t think that filling those last three seats will be any problem at all,” he said.
More from NewsMore posts in News »