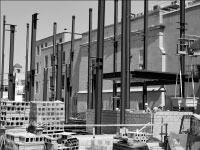 Construction on Westlake Hall, the Puterbaugh Athletic Arena and the Hayden-Clark Alumni Center is progressing on schedule.
“There were a few delays in the building of the arena in 2009 due to record-breaking rains,” said Assistant Project Manager for Construction Jesse Staley. “There was too much water and mud to work in. There were also a few days when it was too cold to work over this past winter.”
Otherwise, construction on the arena is moving ahead at a good pace, Staley said.
“The gym floors have been put in and bleachers are currently being installed,” he said. “Carpeting has been put down and all of the painting is done as well. Two out of four elevators have been inspected at this point. We’re working on completing the office areas now. Everything is really coming together now. We get a little closer to completion every day.”
Occupants will be allowed in the arena in mid to late July of this year, right on schedule, Staley said.
However, construction on the alumni center is just in the beginning stages.
“The construction team is currently starting to lay down the steel structure of the building, and that’s where the focus is for now,” Staley said. “The foundation is already poured, and limestone is currently being ordered for the outside of the building.”
The alumni center should be completed by January of 2011, he said.
Construction on Westlake has also just begun.
“We’ve just started construction on Westlake, and there haven’t been any delays yet,” Staley said. “We’re working on setting up all the utilities for now and excavation will be the next step. We will also be putting in two steam vaults. One will be in front of Westlake and the other will be on the southwest corner of Bradley Hall.”
The large structure in front of Westlake is protection for the construction workers, he said.
“The structure in front of the building is temporary shoring for the men as they work on the steam piping below ground,” Staley said. “The steel plates of the shoring create a safe place for the men to work. The shoring will probably be gone by next week.”
There is no set completion date for the Westlake construction as of right now, he said.
“I don’t know of any finish date yet for sure, but we’re just starting out and everything is moving along smoothly,” Staley said.
Staley said he was unsure about when Haussler Hall would finally be razed.
“We’re trying to concentrate on our three current projects right now,” he said. “But we’ll get there eventually.”
Sophomore finance major Ben Sellnow said the construction around Westlake is a little inconvenient, but necessary.
“I work out at Markin every morning, and it’s a little annoying to have to walk all the way around Westlake to get there,” he said. “However, I understand the need to block everything off and it’s not really a big deal. The campus isn’t huge and I can manage it. I’m going to Markin anyway, and a little extra exercise won’t kill me.”
More from NewsMore posts in News »