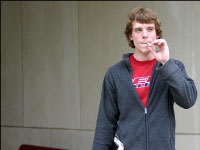 For on-campus smokers, lighting up 15 feet away from any building may not be far enough.
A new resolution backed by SONOR, if passed, would designate specific areas on campus where smoking is allowed.
Sophomore student organization senator for SONOR Jihan Bibb said the resolution is still being constructed.
“The first reading of the resolution was last Monday,” she said. “Nothing is final within the resolution, and we are currently making changes and asking students for their feedback so the resolution is as effective as possible.”
Bibb, who co-authored the resolution with sophomore student senator Jami Smith, said the resolution will be re-read at the upcoming Student Senate meeting Monday, followed by a vote.
Bibb said the purpose of the resolution is not to make a motion toward a smoke-free campus.
“We just want to designate areas on campus for smoking,” she said. “In doing this, we hope to reduce the risk of second hand smoke, the litter from cigarettes on campus and over all provide non-smoking students with a healthier living environment.”
Smith said student complaints brought the issue to her attention.
“We kept hearing people complain about people on campus smoking everywhere,” she said. “So that and trying to reduce health issues is why we wanted to make this resolution.”
Regardless of the intentions, smokers and non-smokers alike said they feel that certain smoking areas would be unnecessary.
“I hate smoke because I’m allergic to it, and I like the 15 feet rule because that way I don’t feel like I’m dying when I walk into a building to go to class,” said sophomore criminal justice major Michelle Frye. “However, I think designated smoking areas would be an infringement on smokers’ rights. They should just enforce the 15 feet rule more often.”
Freshman civil engineering major Ryan Woosley, a smoker himself, said he thought moving to specific areas to smoke would be too much of an inconvenience.
“It would just be such a hassle,” he said. “And yeah, when it was colder, people would stay closer to the doors. But we do follow the 15 feet rule when it’s warmer outside.”
Woosley said more places such as the roofed sitting area outside of Heitz Hall could be a good alternative.
“I haven’t seen that anywhere else, and I think if they had more of those it would be helpful,” he said.
Smith said details and locations of the resolution are still unknown.
“The 15 feet rule will still be included, but we aren’t sure about where everything would be,” she said. “It’s still really new, so we’re going to try and work it out.”
More from NewsMore posts in News »